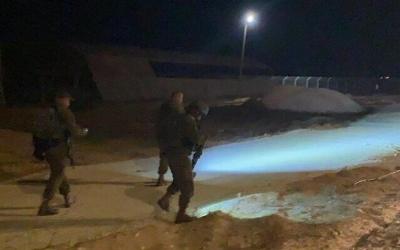 Israeli security forces search the area where a Palestinian man entered southern Israel from the Gaza Strip on May 30, 2021. (Photo courtesy Hamal Darom)

Israeli stabbed by Palestinian who entered Israel from Gaza

A Palestinian man armed with a knife entered Israel from the Gaza Strip and stabbed a security guard, lightly injuring him, outside an Israeli town near the enclave on Sunday night in a suspected terror attack, Israeli authorities said.

The Israel Defense Forces said early Monday that it was investigating the case, specifically how the man crossed into Israel from Gaza without being stopped.

Though Palestinians regularly attempt to cross into Israel from Gaza, it is highly uncommon for them to make it so far into Israeli territory without being seen and detained by Israeli troops.

According to the IDF, the assailant was spotted by community security officers as he was walking along the road near the Sdeh Avraham community in the Hevel Eshkol area of southern Israel, near the borders with Gaza and Egypt.

When they approached him, the man took out a knife and stabbed one of the security officers. The other officer at the scene shot the assailant, injuring him, according to police.

The wounded security officer, who was unarmed as he had been barred from carrying a gun, was taken to a nearby hospital for medical treatment, as was his assailant, whose condition was not immediately known.

Many Israeli communities in areas with security concerns maintain a team of armed guards known as community security officers.

According to the Kan broadcaster, the suspect was believed to have entered the area from near the Kerem Shalom Crossing between Israel and Gaza. He reportedly had identifying documents indicating he was from the area of Rafah in southern Gaza.

Residents of the Hevel Shalom region, which includes Sdeh Avraham and other small agricultural villages, were instructed to stay near their homes and refrain from traveling on the road for over an hour while security forces searched the area for possible accomplices.

The directive was later removed when it became clear that no one else had entered Israeli territory from Gaza.

The incident came as much of southern Israel remained on edge, less than 10 days after a round of intense fighting between Israel and the Gaza-ruling Hamas terror group drew to a close.

Thirteen people in Israel, all but one of them civilians, were killed, as southern Israel was pummeled by rockets. Over 250 people were reported killed in Gaza by the Hamas-run health ministry during the 11 days of fighting. Israel maintains that most of those killed were terror combatants and that some Palestinians were killed by errant Hamas rockets, not Israeli airstrikes.

While Israel has a high-tech series of fences and walls guarding its frontier with Gaza, both above- and belowground, a number of gaps remain in the steel fencing surrounding the Strip.

In times of low visibility, these gaps have been used by Palestinians in the Gaza Strip to illegally enter Israeli territory, often with hopes of fleeing the beleaguered enclave. Attacks on Israeli civilians by those infiltrating from Gaza are rare.