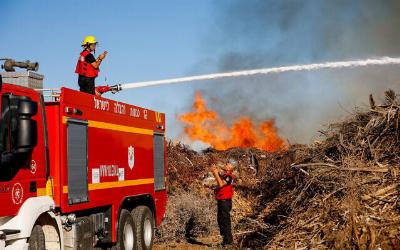 Firefighters try to extinguish a blaze in southern Israel that was sparked by a ballon-borne incendiary device launched by Palestinians in the Gaza Strip, June 15, 2021. (Flash90)

Firefighters battled four blazes in southern Israel Wednesday that were sparked by balloon-borne incendiary devices launched from the Gaza Strip for the second day in a row.

The fires, all located in the Eshkol region, were small and posed no risk to nearby communities, the Fire and Rescue Services said in a statement.

The IDF struck Hamas military targets in Gaza after midnight on Wednesday in response to Tuesdayâs arson attacks, which caused 26 fires in southern border towns.

The arson attacks and IDF counterstrikes were the first exchange between terror groups in Gaza and the army since last monthâs 11-day conflict in the Strip.

The retaliatory airstrikes were also the first since Naftali Bennett took over Sunday as premier. The Yamina chairman has long insisted that the IDFâs response to arson attacks should be the same as for rocket fire.

Earlier Tuesday, the Hamas terror group had claimed victory after a march of right-wing Jewish nationalists in Jerusalemâs Old City on Tuesday was rerouted away from the Muslim Quarter, claiming to have established a ânew formula of deterrenceâ vis-Ã -vis Israel.

âThe brave positions and decisions of the Palestinian resistance forced the Israeli occupation to change the path of the route away from Al-Aqsa Mosque, change the civil air routes and beef up the deployment of the Iron Dome,â the terror group said in a statement.

The parade, the first major test of the new government sworn in Sunday, was rescheduled after the original Flag March was halted on Jerusalem Day, May 10, when the Gaza Stripâs Hamas rulers fired rockets at Jerusalem, setting off 11 days of fighting.

Hamas had threatened to attack Israel again over the rescheduled march, but ultimately refrained from firing rockets.

According to Channel 12 news on Tuesday, Israel warned Hamas via Egypt that there would be a tough and immediate response to any rocket fire from Gaza.

The network also noted Hamasâs frustration over the stalling of the latest installation of monthly aid from Qatar. The payment of millions of dollars has not been transferred since last monthâs Gaza war, with Israel refusing to allow it unless the terror group releases two civilians and two bodies of IDF soldiers itâs been holding captive. Egypt has also opposed restarting the Qatari payments, insisting that a new mechanism be used to transfer them to Gaza so that they donât reach Hamas directly.