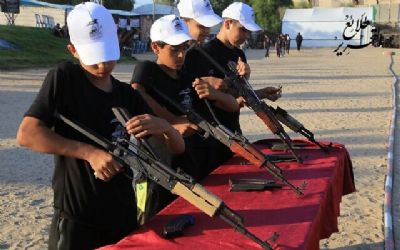 Children train in weapons-use in the Gaza Strip, summer 2021 (Hamas)

The Hamas terror group has launched its annual summer camps for Gaza children featuring military training for the Strip's young. At the "Pioneers of Liberation" camp, kids wear Hamas uniforms and undergo various training exercises to prepare them to fight Israel. This year, campers are also being trained through computer simulations in which they shoot soldiers and policemen at Jerusalem's Temple Mount and Al-Aqsa Mosque. Another simulator features an anti-tank missile that kids use to fire on Israeli targets. The children are indoctrinated in Jihad and hatred for the "Zionist enemy." In previous years, children were taught to stab and stone Israeli police in order "to liberate Al-Aqsa," while instructors lionized those who fall as "martyrs" against the enemy. Hamas in May fought an 11-day conflict with Israel, the worst flare-up of violence between the sides in years. Thirteen people in Israel, all but one of them civilians, were killed as the southern part of the country was pummeled by rockets. The Hamas-run health ministry reported 250 people killed in Gaza during the 11 days of fighting. Israel maintains that most of those killed were combatants and that some Palestinians were killed by errant Hamas rockets, not Israeli airstrikes.