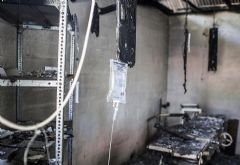 Patients in South Sudan have been shot to death in their hospital beds, and medical facilities have been looted and burned to the ground, forcing the aid group Doctors Without Borders to reexamine its operations here.

The extreme violence and lack of respect for health care workers shown by South Sudan's warring sides have made Doctors Without Borders' work almost impossible, the international group said Wednesday.

Members of the aid group discovered at least 14 patients killed in a hospital in the contested city of Malakal over the weekend, the group said, adding that several of the patients had been shot in their beds. Rebels have been fighting government forces for control of the city, the capital of an oil-producing state.

In addition, Doctors Without Borders' facilities in the towns of Leer and Bentiu have been looted and destroyed, the group's leader in South Sudan, Raphael Gorgeu, said.

Gorgeu said Doctors Without Borders does not want to pull out of South Sudan, where 800,000 people have been displaced and 3.2 million are in immediate need of food due to fighting that broke out in mid-December. But he said the group must maintain the safety of its workers.

'How could we stay to the very last moment [without] the guarantee that our staff and patients will not be targeted?' he said.

At the end of January, thousands of residents fled as fighting broke out in Leer, the hometown of rebel leader and former vice president Riek Machar. Doctors Without Borders, which has worked in Leer for 25 years, evacuated staff. The group returned this week to find their hospital - a facility that served 300,000 people - destroyed.

'We don't want to leave South Sudan, definitely not, but we have to look at things very carefully now,' Gorgeu said