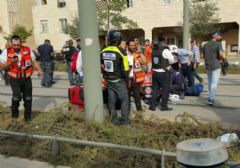 Two people were wounded in a stabbing attack carried out by two terrorists in the Pisgat Ze'ev neighborhood of Jerusalem on Monday.

One terrorist was neutralized and another suspect was arrested after attempting to flee the scene.

MDA paramedics said that two people were wounded in the attack, a 20-year-old and a 16-year-old, both in serious condition. Both victims were transported to Hadassah University Medical Center in the capital's Mount Scopus neighborhood.

The incident was the third terror attack of the day in Jerusalem.

On Monday morning, a Palestinian terrorist was shot and killed near Lion's Gate, in the Arab Quarter of Jerusalem's Old City, after attempting to stab a Border Police officer.

According to police, at approximately 9 a.m., the assailant, whom police deemed suspicious, was asked to stop for inspection. The suspect then withdrew a knife from his pocket and charged one of the officers, stabbing him in his metal breastplate.

Hours later, an Arab woman was shot after stabbing a Border Police officer near the capital's police headquarters.

According to Police spokesman Micky Rosenfeld, the attack took place at approximately 2:15 p.m., near the Ammunition Hill light rail stop, when the unidentified suspect stabbed the officer on a sidewalk.

"Officers on the scene shot the woman immediately and cordoned off the area," Rosenfeld said minutes after the attack. "The officer was treated by Magen David Adom paramedics and rushed to an area hospital in light-to-moderate condition."

Rosenfeld said the suspect was seriously injured and has also been hospitalized, adding that police have cordoned off the scene.

"Police are investigating the attack and continue to maintain a high level of security throughout the capital," he said.