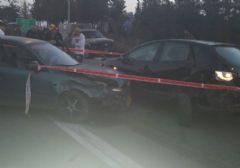 3 Killed, Including American Tourist, in Terrorist Shooting near Gush Etzion in the West Bank

Three people were killed and five others were wounded in a terrorist shooting attack near the Gush Etzion Junction in the West Bank Thursday afternoon.

Initial reports suggest that the terrorist fired from his car at an Israeli minibus near the Gva'ot Junction. He then continued some 300 meters, slamming into another car near the Alon Shvut settlement. The terrorist exited his vehicle and attempted to fire off further shots, but he was shot and apprehended by security forces who were on the scene.

MDA paramedics pronounced an 18-year old man dead on the scene after efforts to resuscitate him failed. The youth was an American tourist. An approximately 50-year old man was critically wounded and taken to Hadassah University Medical Center in Jerusalem where he was pronounced dead.

The third victim was a Palestinian bystander.

In addition, three others who were lightly wounded and two who suffered shock were evacuated to the Shaare Zedek Medical Center, which is also located in the capital. The Gush Etzion area has been the scene of numerous terror attacks over the past two months.

The incident followed shortly after a fatal terrorist attack that occurred in Tel Aviv earlier in the day.

A Palestinian terrorist stabbed three people in south Tel Aviv on Thursday, killing two of them and wounding another. In that attack, police said that the terrorist attempted to flee the scene, but was apprehended by civilians who subdued him until police forces arrived on the scene. The suspect was arrested and taken in for questioning.

The Shin Bet stated that the attacker was a 36-year-old Palestinian from the village of Dura near Hebron. He did not have a previous security record. According to initial reports, the suspect had a permit to work in Israel and was employed at a nearby restaurant.