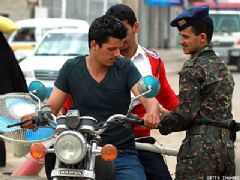 4 Murders of Gay Men in Yemen

A news headline went unnoticed by the international media. It simply said 'Four murders of gay men in Yemen.'

An LGBT support group in UK, Rainbow Warriors, published the news in September 16, 2015, stating that the gay community in the Yemeni port city Aden has reported four targeted assassinations of gay men there since August 23ed; that is since the Yemen-based Al Qaeda in the Arabian Peninsula (AQAP) took control of some parts of the port city.

In the midst of Yemeni mayhem, the international media is excused not to pay attention. Why should they care about the fate of four persons at a time when a whole population is being besieged, bombarded and starved to death? Yet this incident should send alarm signals worldwide -- for it does give us a taste of what is yet to come. It tells us that if Yemen's chaos continues, the consequences will come back and bite us.

A Proxy Regional War with a Devastating Humanitarian Outcome

The war in Yemen is a complex issue. A civil war is taking place on the ground and regional powers, namely Saudi Arabia and Iran, are supporting different warring actors.

Two parties to the conflict are fighting the war:

Moreover, the Saudi led Arab Coalition aerial and naval blockade on the country has led to a de-facto starvation of the Yemeni population, especially as Yemen importsabout 90 percent of its food and fuel from outside the country, including the lion's share of its wheat and all its rice.

Chaos, Murders of Gay Men and Rise of Islamist Groups

It is not surprising therefore that the death of four gay men went unnoticed in the midst of this catastrophic situation.

The targeting of these four persons was done because of their sexual orientation. Imagine if Islamists targeted four gay men in the midst of Zurich, London or Washington, how would the reaction be?

But then again we are talking about Yemen, where an individual's life has little if any worth for a confused global audience -- consider the silence of the international community to the alleged war crimes committed in Yemen and the picture will become clear.

Perhaps we should therefore look at the issue from a different angel: how does this war affect us here in Europe and North America?

Both Al Qaeda and the Islamic state are taking advantage of the power vacuum and chaos in Yemen. Both groups are fighting for influence in the southern regions and manifesting their presence in Aden. And both are benefiting from a Machiavellian tactics used by the two parties to the Yemeni conflict.

The Huthis are known enemies of the Sunni radical Islamists and they have suffered from several suicide attacks from both Al Qaeda and IS.

However, former President's Saleh has often nurtured strong relations with Jihadists in Yemen, and some of his actions during the war, such as ordering his troops to withdraw from certain areas in the South only to be occupied by Al Qaeda militias may be construed as tactical manoeuvres intended to highlight his 'indispensability' for stability in Yemen.

On the other hand, Saudi Arabia and its Yemeni allies are reportedly fighting side by side with followers of Al Qaeda in the Arabian Peninsula AQAP -- they share the objective of defeating the Zaydi Huthis.

Supporting Jihadists and the Regional/Global Consequences

This policy of supporting Jihadists is not new to Saudi Arabia. In fact, in the on-going cold war between Sunni and Shia Islam(s), it is reported that substantial and sustained funding from private donors in Saudi Arabia and Qatar has played a central role in the ISIS surge into Sunni areas of Iraq. Similarly, it is also confirmed that Saudi Arabia and Qatar, in their attempts to topple Syrian President Bashar Al Assad, have funded Islamist groups -- some are local Jihadi Salafis such as Ahrar al-Sham and Jaish al-Islam and others are known Al Qaeda affiliate, such as al-Nusra Front.

Ironically, since the war started, the United States continued its drone attacks in Yemen targeting Al Qaeda leaders while tactility supporting the Saudi air bombardment. Its extended support to Saudi Arabia is known to be reluctant. Behind the scenes, American and Western policy makers doubt that an air campaign will decide the outcome of the war and are growing impatient because of the humanitarian costs to Yemeni civilians.

Yet American war against Al Qaida seems meaningless at a time when its allied Gulf kingdom is working on the same side as Al Qaeda militias in Yemen, and indirectly, facilitating its rise.

The intended objectives of Saudi policies in Syria, Iraq and Yemen were not achieved.

Al Assad remains in power, an alliance between Iran, Syria and Russia has been undermining Saudi Sunni hegemony and its Jihadist allies in the region, and a swift end to the Huthis never materialised.

What happened instead is a destabilization of the Arabian Peninsula and its neighbouring countries. Never mind the displacement of millions of Syrians, Iraqis and Yemenis; the targeting of minorities, and the enslavement of women and children in Iraq and Syria.

Saudi Shia minority, estimated to be 10-15 percent of the population, are growing restless and are vocal in their opposition to the Yemeni war -- especially as the Saudi media is painting these wars in sectarian colours. The Kingdom is not as stable as one would like to think.

Sultanate of Oman -- which refused to join the Saudi led alliance, opened its borders to Yemeni refugees and is attempting to mediate an end to the war -- is watching the developments with growing concern. The fate of south of Yemen is vital for its own stability as Oman's southern region is predominantly Sunni. A growing influence of Al Qaeda and IS militias is bound to spell over its borders. The majority of Omanis belong to the Ibadi denomination of Islam (neither Sunni nor Shia), considered as heretical by these two Islamist groups.

This destabilization seen in a context of a connected square of Islamist controlled areas in Syria, Iraq, Yemen and Horn of Africa should concern us.

The death of four gay men may be of no consequence in the midst of Yemeni mayhem -- but it does send us alarm signal about the growing influence of Al Qaeda and Islamic State in Yemen. It reminds us that in an interconnected world, ignoring such chaos is bound to come back and haunt us. Think of the Charlie Hebdo massacre (planed by Al Qaeda in Yemen) and the waves of refugees flooding Europe and the relevance to Europe and North America will become clear. An end to this chaos should be your priority as well.