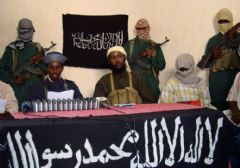 Four people were wounded Thursday in a vehicular terror attack near Kfar Luban, on the main road leading to the Israeli settlement of Beit Arieh in the West Bank, according to the IDF.

A black Isuzu vehicle escaped from the scene. Police later found the car abandoned with an M16 rifle and a stun grenade inside. The attacker remained at large.

In the attack, paramedics said that a 19-year-old man was seriously-to-moderately wounded. Three other people were lightly wounded. They were taken to Rabin Medical Center's Beilinson Campus near Petah Tikva for treatment.

On Wednesday, two terror attacks took place in the West Bank after several days without an attack.

First, a Palestinian terrorist wounded an IDF soldier and a civilian in a stabbing attack near Beit Hadassah, a building that houses Jewish families in the West Bank city of Hebron. One of the victims was moderately wounded and the other was suffering from light injuries. The incident occurred during a security check at the entrance to Beit Hadassah.

Hours later, an Israeli couple was wounded in a drive-by shooting near Tulkarm in the northern West Bank. The wounded man, Shaul Nir, had been a convicted member of a Jewish terrorist group that perpetrated lethal attacks against Palestinians in the 1980s. He and his wife, Rachel, sustained gunshot wounds in the attack when a Palestinian showered their vehicle with bullets as they drove near the Palestinian village.