U.N. Inaction on Democratic People's Republic of Korea
All Actions of the UN Human Rights System Critical of Specific States, 2007 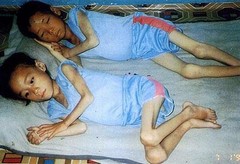 430 N. Koreans Said To Die of Hunger In Past Month

"SEOUL, South Korea -- About 430 North Koreans have died of hunger in a northern region of the impoverished communist country in the past month because of chronic food shortages, a South Korean aid group said yesterday.

The number of people who starved to death is also on the rise in other northern regions, with an average of four people dying a day in hospitals in each county and city in that area, the Good Friends aid agency said in a newsletter.

"The death toll could be even higher as we don't have full statistics in the North," Erica Kang, a spokeswoman for the aid agency, told the Associated Press.

North Korean authorities have said illnesses were to blame for the deaths but that they were caused by long-term malnutrition, the aid agency said, citing an unidentified doctor in the North. The aid agency did not say how it obtained the information.

Some of its previous reports inside the isolated country have later been confirmed. The group released a similar report earlier this month, saying the North's food situation was worsening.

The Unification Ministry, which handles inter-Korean affairs, said it could not confirm the report.

Despite the food shortages, the North doled out food rations to people in the capital, Pyongyang, the agency said, in an apparent move to draw loyalty from the country's top elite. The North also supplied food to the military, easing its complaints and enabling the military to regain stability, said the aid agency.

The North's leader Kim Jong Il has channeled the country's scarce resources to the military."