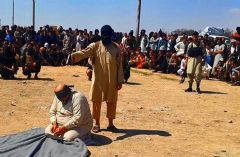 A victim of Islamic State

SOHR documented the death of 69 Syrian citizens who were executed by the IS during 5 days since 28th of Mar/2015 until yesterday in Hama, Homs, and Der-Ezzor including 3 children and 11 women.

SOHR received a footage shows a soldier in the regime forces who "confessed" that he is from the province of Homs arrested from the abandoned battalion near the airbase of T4 in the countryside of Homs, The footage shows firing of about 20 bullets on the tied soldier who was lying on the ground, then IS militants dragged the soldier after he was tied behind a car carrying some IS militants.

IS executed a former Amir in Jabhat al-Nusra in addition to another element in al-Nusra in the charge of fighting the IS in Jadid Akidat village east of Der-Ezzor which is the hometown of the Amir, sources confirmed that both of them gave up the fight against IS earlier and delivered their weapons.

IS also executed 2 men from al-Ramadi village in al-Bukamal countryside in the 1st of Mar/2015, sources reported that they were former rebel fighters, inthe same day IS executed 2 men from al-Kharitaand al-Ashara in Der-Ezzor countryside in the charge of fighting IS, in addition to executing a man from al-Shehel in the eastern countryside of Der-Ezzor in the charge of dealing with is opposition. IS executed 46 civilians including 3 children and 11 women in addition to 6 militants allied to regime forces in al-Mab'ouja vilalge in Salamia eastern countryside, Hama.