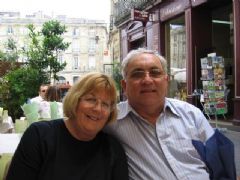 Karl Andree with his wife in happier times

Karl Andree is a 74-year-old British grandfather. For the past 25 years, he has lived in Saudi Arabia, working with local oil companies. According to his children, he was quite happy there, even when his wife, Verity, was forced to return to Britain to help cope with her worsening Alzheimer's.

However, Andree has suffered serious problems in Saudi Arabia over the past year â and his problems may well spell trouble for relations between Britain and Saudi Arabia.

On Aug. 25, 2014, he was arrested by religious police in Jiddah after they allegedly found bottles of homemade wine in his car. He has served a one-year prison sentence for possessing alcohol, which is illegal in the conservative Islamic country. However, he has not been released - and his family said he now faces 350 lashes in a public flogging.

"My dad broke the rules in a country that does not allow alcohol but he's served his time," his daughter, Kirsten, told the Sun tabloid this week. "Dad is 74 and not a well man. I worry he won't survive this ordeal."

In an emotional appeal published Monday, Andree's family called on British Prime Minister David Cameron to step in to help their father. The family said it had worked with the British Embassy in Riyadh - to no avail. "The Saudi government will only listen to him," Andree's son Simon told the Sun, referring to Cameron.

On Tuesday, Cameron's office indicated that the British leader will write to Saudi authorities to protest Andree's "extremely concerning" case. "Our embassy staff are continuing to assist Mr. Andree, including regular visits to check on his welfare, and frequent contact with his lawyer and family," a Foreign Office spokesperson told WorldViews.

Andree's case comes after a groundswell of international criticism over Saudi Arabia's human rights records, sparked by the flogging of blogger Raif Badawi and reports of the planned execution of activist Ali Mohammed Baqir al-Nimr, who was arrested at 17 for allegedly taking part in anti-government protests. Saudi Arabia has responded to these criticisms forcefully over the past year, arguing that its legal system is based on sharia, or Islamic law.

The flood of criticism has brought heightened scrutiny of Britain's ties with Saudi Arabia, a major financial and political partner in the Middle East. On Tuesday, the prime minister's office announced that Britain had pulled out of a proposed $9 million deal under which it would sell prison expertise to Saudi Arabia.

The proposed deal had proven exceptionally controversial in Britain, withopposition leader Jeremy Corbyn last month calling for the government to cancel it. The Times of London reported that the Conservative government had been split over it, with Justice Secretary Michael Gove reported as saying that he opposed supporting a regime that carries out beheadings and stonings, while Foreign Secretary Philip Hammond was worried that canceling the deal would make Britain look like an untrustworthy ally.

In an interview with BBC Radio 4, Simon Andree had suggested that Britain's business links to Saudi Arabia were to blame for the British government's slow reaction to his father's case. "He's at the bottom of a pecking order and all the business dealings with Saudi Arabia and the UK are probably taking priority over it," Andree said.

While the prime minister's office has stressed that the two issues are separate, the contract was canceled shortly after Andree's family made their appeal to Cameron. Speaking in Parliament on Tuesday, Gove said that security cooperation between Saudi Arabia and Britain had "saved British lives in the past" and should continue, but that there needed to be a balancewith "standing up to the values that our citizens believe in and would like to see us promote."

After the prime minister's announcement, Simon Andree told the Guardian newspaper that he was pleased that Cameron would step in, but he expressed reservations about the canceled prison deal. "I just hope that the breakdown of this deal won't affect" his father, he said. "It was never my intention. I hope it won't impact upon him. This case was always about my father's health."