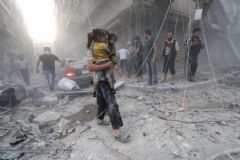 SOHR could document the death of 247 civilians in the consecutive massacres carried out by the regime air force in several towns and cities in the Eastern Ghouta and in the province of Rif Dimashq. Among the death toll documented from August 16 to this dawn, there are 50 children, 25 women and several families. Targeting the Eastern Ghouta left 1000 injuries, dozens of them were seriously wounded. The airstrikes also caused material damages in people's properties.

SOHR holds the international community especially the International Security Council the moral responsibility towards the daily killing committed against the Syrian people by al- Assad regime particularly in the city of Duma, which has been besieged for 2 years. Therefore, those criminals are not going to stop committing more massacres as long as they known that there is no punishment or trials against them. Accordingly, we call on the UN Security Council to send the file of war crimes and crimes against humanity committed in Syria to the International Criminal Court.