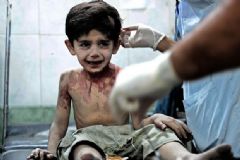 SOHR documented 33376 airstrikes carried out by the regime air force since 10/20/2014 until this morning 08/20/2015, where the airstrikes targeted several villages, towns and cities in 13 provinces.

On the other hand, SOHR also documented the death of 5499 civilians, including 775 women, and 1122 children, due to aerial bombardment carried out by the government warplanes and helicopters, while about 30000 other civilians were wounded and dozens of thousands displaced. The aerial bombardment also resulted in destroying public and private people's properties as well as it left huge material damages in several areas.

The explosive barrels and air raids resulted in the death of 2698 fighters from al- Nusra Front, IS, rebel and Islamic battalions while thousands fighters were wounded too.

With the escalation of airstrikes carried out by the regime air force on different areas in Syria without distinguishing between the civilian and military targets, SOHR holds the international community the moral responsibility towards the daily killing committed against the Syrian people, and demands the International Security Council to work seriously to stop the daily killing and displacing the Syrians and to help them to reach to the state of democracy, justice, freedom and equality that ensure all rights for all component of the Syrian people without discrimination. It also re-call the UN Security Council to issue a binding resolution to stop the military operations in Syria and to refer the file of war crimes and crimes against humanity to the International Criminal Court.