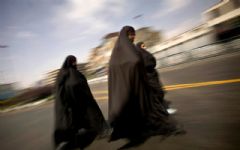 Zealots on motorcycles are throwing acid at women whose veils are deemed too loose in the ancient city of Isfahan. Are they defying the law, or enforcing it?

Every day before leaving home, Sara stands before the mirror and tightens the knot on her scarf. She has not worn makeup for two weeks and she wears a black long-sleeved top under a raincoat. She checks the buttons to make sure that they are all tightly fastened. But when she steps outside, she still worries. And so do her parents.

Sara, 21 years old, lives in the historic Iranian city of Isfahan, close to Jolfa, the Christian quarter. For the past two weeks there have been rumors going around that a group of motorcyclists are throwing acid on women whose hejabs, the veils to be worn over the hair in the Islamic Republic, do not meet this gang's standards. They target women's faces, and the attacks are said to have been concentrated, precisely, in Sara's neighborhood.

On October 16 the Iranian Students' News Agency (ISNA) confirmed one report: a woman in a car had been attacked, and acid was thrown in her face. There was widespread speculation that it was done as a means of punishment because the woman was wearing an "improper" hejab arranged to show too much of the hair and face beneath. Colonel Hossein Hosseinzadeh, deputy commander of the security forces in Isfahan, confirmed that two such attacks had taken place, but he said the motive was not clear and the police were pursuing the matter.

Fazlollah Kafil, Isfahan's governor, said that the victim was a married woman. “It is possible that the motive was personal," he said. "We have to investigate such cases carefully. If we are too hasty, we will make people feel unsafe. Police will let us know what they find out as soon as possible."

But residents of Isfahan feel unsafe already. According to some reports, up to six women have been taken to Isfahan's Feyz Hospital in connection with acid attacks. The hospital specializes in treating eye conditions. One person IranWire spoke to said the average age of the women is about 30.

In addition to this, there were other reports. "I had two patients who were burned by acid," a doctor at Isfahan's Burn Center told IranWire. "I am not at the hospital every day and every hour, so it is possible there have been other cases that I don't know about."

Around the time ISNA first reported one attack, people living near Martin Passage in Jolfa witnessed another. Although it was not reported by the media, Sara was there shortly after it happened. "I went to Martin Passage to do some shopping," she says. "When I got close I saw that people had gathered around and the street was very crowded. At first I thought there had been a traffic accident but when I got close and asked people they said that two young women had been attacked from behind by somebody who had used a syringe to throw acid at the them. People said that acid had made holes into their manteaux and had burned parts of their bodies."

Another Isfahan resident told us, "Two weeks ago a group of motorcyclists threw a bucket at the faces of some women to frighten them. There was no acid in the bucket, just water mixed with some cleansers, which gave the sensation of burning. They just wanted to frighten people. But in recent weeks there have been real acid-throwing attacks."

All of this comes just as the Iranian parliament has passed a law that gives further powers to morality patrols. Ansar-e-Hezbollah-or the "Supporters of the Party of God"-a militant fundamentalist group, announced it would be resuming its street activities, which include targeting for harrassment women who are not wearing what the group deems to be proper Islamic headscarves. Ansar-e-Hezbollah also has said in the past that sexual violence against women can be attributed to such instances of female impropriety. In the current climate, fundamentalist vigilantes may well believe their actions are justified.

Other Isfahan residents who spoke to IranWire said anyone who witnessed the attacks reported that those throwing acid on women rode large motorcycles and conformed to the stereotype of very religious people. "In mosques and other ceremonial gatherings," one resident explaine, "there have been calls for women to observe rules around wearing a proper hejab, in order to prevent certain people from being provoked."

Thus the rumor as well as the reality of the threat is used for intimidation.

Of course, many people who consider themselves to be devoutly religious and who follow a more fundamentalist branch of Islam are stunned to hear what is happening in Isfahan, and this includes influential officials and politicians. "I heard the news a couple of hours ago and it really shocked me," Akbar Pakzad, a well-known commander of the Revolutionary Guards in Isfahan told IranWire. "Such actions are forbidden, whether by religion, by sharia or by the law. They are not human. Anybody who takes such actions under any pretext has committed a crime and must be punished under the maximum penalty." He considers throwing acid a deadly sin, which must be punishable by death.

When asked what he thinks about Ansar-e-Hezbollah taking action against those who do not observe rules pertaining to Islamic dress for women, he says, "I am not a member of Ansar-e-Hezbollah. I belong to the Revolutionary Guards and at this moment I am an advisor to Commander [Qasim] Soleimani [the commander of the Qods Force] for military training. I condemn this action from the viewpoint of the Guards and the [paramilitary] Basij. About Ansar-e-Hezbollah you have to talk to Hojatoleslam Kamil Kaveh."

Pakzad is referring to the head of Ansar-e-Hezbollah in Isfahan, who denies having heard the news. "Unfortunately or fortunately I have not heard anything about it," he said. "A Muslim would not even think about doing such a thing even if he has only a drop of religion in him."

Asked whether Isfahan's Ansar-e-Hezbollah have started up a campaign against women who do not wear their hejab in line with what the group thinks is acceptable, he gives an odd answer. "We do not have the good fortune at this time," he says, without explaining why. "I have to go to Friday Prayers and cannot talk any more," he says before leaving.

Though IranWire contacted the police for a comment, they refused. In general, Isfahan authorities have been unwilling to speak on the matter. But the people of Isfahan are talking, and some are feeling decidedly anxious and worried.

Since witnessed the aftermath of the attack near her home, Sara has discussed it many times with many people. Every time she looks in the mirror, she says, she thinks about what has happened and is horrified. "Believe me," she says, "every time, I think: this is the last time I will see my face intact."