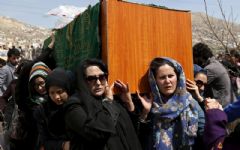 A band of 30 Afghan women carried the body of murdered student Farkhunda through the streets of Kabul yesterday, defying the girl's murderers in order to give her a proper burial. They speak to The Daily Beast about their immense act of courage.

Yesterday, a courageous band of about 30 Afghan women, many of them clad in black scarves and some in black outfits, did something remarkable: they literally shouldered the young woman beaten and burned to death by a mob in Kabul, carrying upon their shoulders her heavy wooden coffin, draped with an ornate green cloth, decorated with verses from the Quran. Bouquets of flowers, still in their clear plastic, lay upon the covering.

Last Thursday afternoon, scores of clean-shaven men, wearing neat pants and shirts for a visit to the Shah-Do Shamshira mosque, or the "The King of Two Swords," in downtown Kabul, Afghanistan, turned into a violent mob, shouting "Allahu Akbar" and beating and stomping a student of Islam, Farkhunda, 28, on the false rumor she had burnt a Quran. After pummeling her, the men ran over her with a Toyota hatchback, dumping her body on the banks of the Kabul River and lighting her on fire. Photos and videos of the murderous rampage shocked the world, just hours later, when they posted on Facebook and social media.

26 men have been arrested in connection to the homicide.

Three days later, more than 1,000 gathered for her funeral in the Afghan capital.

"Maa hama Farkhunda yem," the women chanted at her gravesite. "We are all Farkhunda."

The symbolic assertion of power and strength by the women, defying a puritanical ban against women at cemeteries, is a hopeful expression for women-and men-in traditional Muslim communities, rejecting antiquated interpretations of Islam that subordinate women, denying them fundamental human rights, such as the right to simply grieve at a gravesite. From Mumbai, India, to Hayward, Calif., mullahs, or religious clerics, ban women from burials, citing an interpretation of Islam, largely exported by the Saudi expression of Taliban Islam that denies women the right to drive cars, vote or run for political office.

Around the globe, from cities in Afghanistan to Toronto and Washington D.C., Afghans plan vigils and protests to demand accountability from the new Afghan government, asking tough questions on police training and rule of law. Afghans in the DC area plan a protest at the Capitol Wednesday to coincide with a visit by Afghan President Ashraf Ghani and Afghan Chief Executive Officer Abdullah Abdullah. "This was a crime against humanity," said Zahra Sultani, an Afghan college student near Toronto where she is running a "If you aren't able to protect a citizen from other citizens, how in the hell are you going to deal with bigger challenge like ISIS and the Taliban?"

The protests and the defiance of tradition by the Afghan women in Kabul underscores how many Afghans, angry over the murder, have reached a tipping point in their demand for human rights in the country. Some of the most offended Afghans are the pious who believe in a tolerant and just Islam. They feel their religion was hijacked. In lengthy interviews in English and Farsi, also known as Dari by some, Afghan women who participated in the prayer told us why they took the weight of Farkhunda's coffin upon their shoulders.

For two days-Friday and Saturday-Sahraa Karimi, director of a film, "Afghan Women Behind the Wheel," about women learning to drive, said she couldn't leave her house upon hearing the news of Farkhunda's murder, not even celebrating the Persian New Year, Nowruz. Then Saturday night, a group of women did a pilgrimage: to the Shah-Do Shamshira mosque where Farkhunda was slain.

"It is something so painful," said Karimi.

The women made a bold decision to go to Farkhunda's house to try to carry her coffin. The next day, around 8 a.m., about a dozen women stood outside the home of Farkhunda's family in a neighborhood in Kabul. They included a closely-knit group of local women's rights activists, like Shakila Ibrahimkhail, an Afghan journalist; Pari Akbar and Nargis Azaryun, 21, activists for youth; and Bahar Sohaili, a flight attendant.

They waited for an ambulance to bring Farkhunda's remains. When it arrived, three of the women-Karimi, Ibrahimkhalil and Azaryun-spoke to Farkhunda's brothers, sisters and family.

They asked them politely: "We want to carry the coffin to the graveyard," recalls Azaryun, the youth volunteer.

Elnaz Arabzada, a professor of sociology in Kabul, was waiting anxiously for the answer. That morning, after the pre-dawn prayer, she had seen a Facebook post about the morning gathering. Three months pregnant, she recalls, "I was trying to convince my family that nothing will happen." She hadn't slept since Farkhundah's murder. "I needed some place to shout and cry loud," she says.

Finally, her family convinced, she took a taxi to Farkhundah's home to join the women. Soon after, she got word: the family had given the women permission to carry Farkhunda's remains in her coffin.

For Azaryun, the youth activist, she felt a visible relief. "I personally could breathe after that," she says.

At Farkhunda's home, Azaryun saw the devastated remains, the young woman's face brutalized. She thought: "The people who did it to her should be punished." Then they followed the ambulance with the body, snaking through traffic for about 20 minutes to Pansad Family Cemetery.

There, after first taking the coffin to a space in the graveyard where mourners prostrated to do a final prayer, the women hoisted the coffin upon their shoulders for the 30 minutes walk to Farkhunda's final burial spot.

Arabzada was struck by men weeping around her, many of them seemingly not related to the victim. "I was waiting to see if men would sit silent in this journey," she says. "If they did, I would run away. I would sell everything and no longer live here. My husband even said we would seek a smuggler to take us out but when we saw the actions of civil society, it made us hopeful."

At the cemetery, some women wore masks of a bloody face to symbolize a shocking much-circulated image of Farkhunda after the attack. Farzana Wahidy, a renowned Afghan photographer, carried the coffin upon her shoulder, not far from Frozan Marofi, a social empowerment manager at a local radio station, who had the coffin on her left shoulder. She stood near her daughter, Regwida Neayish.

Nearby, Munera Yousufzada, a political scientist and civil society activist, wearing an orange shirt, carried the coffin on right shoulder.

Neayish, a medical student, stood among the women, performing this Herculean task, not just in body but in spirit. "I was just crying," she says. "It was a long trek and I injured myself but all my energy was focused on giving Farkhunda a respectable burial. It was the first time I realized my real power and told myself that I'm breaking the boundaries of tradition."

At the grave, Lina Alam, an actress, stood there with several women, as the coffin was lowered into the earth. Alam voiced fear that some of the mourners might also be Farkhunda's attackers.

Suddenly, a prominent mullah appeared. He was Mohammad Ayaz Niazi, a cleric who had supported the murder on video two days earlier. Marofi, the social engagement manager, shouted: "You are not allowed to do the janaza," the funeral prayer. "Leave!"

Activists are demanding for him and other officials, including a woman, Simin Hassanzada, the deputy for publication at the ministry of information and culture, to step down from their positions for defending Farkhunda's attackers. Both have apologized but activists say that's not enough.

A fallen sister was buried, and one of her brothers stood before the women and declared, "If I have lost my sister, I have found 30 other sisters today."

The weight of the coffin still fresh, Arabzada has a simple prayer: that she "won't ever have to carry another women's coffin."

The intention was not to rebuff men, Azaryun, the youth activist, says. "I didn't pick the coffin up to tell the men that they are less of a man or anything like that. I picked it up because I wanted to tell the women in this country that if we want to achieve anything we should set up, and do what we want to do. Do it like a woman. And if we stick together, we break taboos. We proved it yesterday. No one could stop us yesterday from being by Farkhunda's side because we were together and supporters of each other."

She adds: "That is what Farkhunda teaches me: together we can change the narrative that others write about women. We stood up against the most respected mullah. We carried the coffin and buried her. If we as women stand together, we can achieve a great change."

As they resisted the mullah's efforts to say a prayer, the women performed one more courageous act of resistance: they interlocked hands and created a circle around Farkhunda's gravesite, until the mullah-with his regressive ideas-departed.