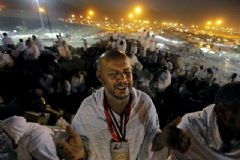 A group of Americans visiting Saudi Arabia to perform Hajj were threatened and attacked earlier this week on Oct. 16 by a radicalized group of extremists. On one of the nights where Hajj pilgrims are required to stay overnight in the city of Mina, a group of young men began asking different sets of pilgrims if they were from the United States.

When they encountered a group that identified themselves as not only Americans, but also as Shiite Muslims, they were threatened and attacked by the group of men, who were apparently armed with knives and other blades.

During the attack, the men reportedly shouted "Our [holy pilgrimage] will be complete once we have killed you, ripped out your hearts and eaten them, and [then] raped your women."

In continuing the assault, the men also shouted "We're going to do Karbala all over again," referring to an important historical event to Shi'ite Muslims, wherein the grandson of the Prophet, named Imam Husain, was brutally attacked and killed, after he was forced to witness the killing of many of his family members.

The survivors of the incident, mostly women and children, were immediately imprisoned in circumstances that resulted in the deaths of some of the prisoners.

The Americans fled the tent area, which the Saudi government had specifically designated for American and European pilgrims. During the escape, many of the group, almost entirely U.S. citizens and mostly hailing from Dearborn, Michigan suffered bruises (in one case, due to an attempted strangulation), concussions, broken bones, and black eyes.

Victims of the attack reported that nearby police refused to take action, and in some cases were openly laughing at the attack. The Americans approached other officers, including one described as a "lieutenant with stars on his shoulder pads." They reported the attack and showed police video footage of the attack taken on cell phones.

The "lieutenant" confiscated the phones and immediately deleted the videos in front of onlookers. Without comment, he returned the phones to their owners and left.

Some victims even tweeted about the attack after reaching safety:

@seyedmg wrote "10 members of our group where attacked by 200 barbarian salafis for making salawat in Mina .... They need your [prayers]."

Later he tweeted, also referring to the incident of Karbala, "They attacked screaming kill them like Hussien [sic] and take there women as captives like Zaynab... We have people bleeding and women terrified"

This twitter account apparently belongs to Seyed Mothafar Al-Qazwini, a young Shiite schoalr. Al-Qazwini posts on his twitter account a video of the man he believes instigated the attack. The video, posted below, is an Australian newscast of 31-year-old Omar Ammouch, who was arrested in Australia for physically attacking Australian Muslims who refused to support the Syrian rebels.

The attackers are believed to be of the Salafi sect, more popularly known as Wahabis, who are often associated with strong anti-Shiite viewpoints. Critics believe that many of Al-Qaeda's members subscribe to the Salafi belief system.

This incident is the latest in a string of attacks against Westerners in Saudi Arabia. In different incidents in past years, Shi'ite Imams from the United States and Canada were either assaulted or arrested for complaining about assaults. The previous incidents, as well as this week's attack, all required medical treatments.

"I personally thought it was the end," said one of the victims of this attack, a dentist from Michigan, not wishing to be identified for fear of reprisal from the Saudi police or other extremists. Continuing sadly, "You always hear about how nice [Hajj] is supposed to be...

"Something needs to do something about [the attack]. If this wasn't the House of God, I would say that I never want to come back."

No witness has thus far been willing to identify themselves, each of them citing safety concerns.