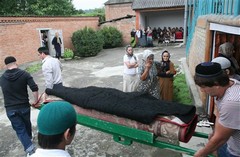 Pallbearers carry the body of slain rights activist Zarema Sadulayeva for burial in her native village of Shalazhi, south of Grozny, Chechnya Tuesday, Aug. 11, 2009. The bullet-riddled bodies of Zarema Sadulayeva and her husband, Alik Dzhabrailov, were found in the trunk of their car Tuesday, a day after they were kidnapped, police and Russian rights groups said. (AP Photo/Musa Sadulayev)
Source: The Associated Press

Another Human Rights Murder in Russia

For the second time in a month, a Chechen human rights activist has been abducted and slain, and this time her husband was also killed.

Fellow activists say Zarema Sadulayeva and her husband, Alik Dzhabrailov, were abducted by five gunmen from the Save the Generation office around 2 p.m. Monday. The charity works with children affected by the violence of war torn Chechnya. Early today, the couple was found shot to death in the trunk of their car near a recreation center in suburban Grozny.

The double murder comes on the heels of the killing of Natalya Estemirova, a fellow rights activist in Chechnya, who was found dead in neighboring Ingushetia July 15. The three were all killed in a similar fashion with shots to the head and chest.

Rights Activists Stunned by the Murder
Rights activists are stunned by Sadulayeva's murder, because her Save the Generation organization is a nonprofit affiliated with UNICEF and gives psychological and physical rehabilitation to children from the war-torn region. Unlike Estemirova, who was a persistently harsh critic of the Chechen regime, Save the Generation is a relatively nonantagonistic group.

"It makes no sense whatsoever, absolutely no sense at all. Chechnya's besides logic at this point," Human Rights Watch's Tanya Lakshina told ABC News. "We thought there would be a break, a pause of sorts after Estemirova. This just shows you that this situation is completely on the loose."

Former Save the Generation worker Murad Muradov was also abducted in 2005, and his body found a year later. Russian news service Ria Novisti reports that police at the time said Muradov was a militant.

The murdered husband, Dzhabrailov, had been imprisoned for his role in the separatist movement. He was released several months ago, and it's unclear whether that played a role in the murders. Chechnya has been torn apart by two separatist wars in the past 15 years, and although the conflict is officially over, there are almost daily reports of clashes between local authorities and militants. While criticized by rights workers for his brutality, Kadyrov has been praised by the Russian government for bringing relative stability to the region.

Activists are furious over the threats and attacks against and killing of their colleagues, and say there is no indication the climate will change.

"There is absolutely no sense there will be an end to impunity, that there will be actual accountability, that the actual perpetrators will be eventually brought to justice," said Anna Neistat, a senior researcher at Human Rights Watch in New York. "I think that does create a climate, which I can only qualify as scary and very, very depressing."