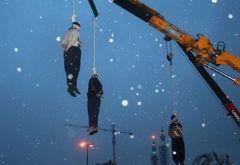 Another Mass-Execution By the Iranian Authorities

At the same time as the six Sunni Kurdish prisoners were executed in Rajaishahr prison of Karaj, Iranian authorities hanged at least 8 prisoners in the Ghezelhesar prison of this city. At least 32 people have been executed in the past three days in Iran.

Iran Human Rights, March 4, 2014: According to sources Iran Human Rights (IHR) has been in contact with at least eight prisoners were executed in the Ghezelhesar prison of Karaj Wednesday morning March 4. According to this report 16 prisoners were transferred from the Unit 2 , ward 4 of Ghezelhesar prison for execution. eight of them were executed and the remaining eight haven't come back to their ward yet.

Six of the prisoners who were executed are identified as: Mohammad Khandan, Mohsen Alipour, Masoud Rasouli, Asghar Mir-Adli and Mohammad Mahmoudi. All the prisoners were convicted of drug-related charges.

Human Rights Activists News Agency (HRANA) reported about 15 executions in the Ghezelhesar prison of Karaj on Wednesday. Eight of these prisoners are the same as the ones reported by Iran Human Rights sources here. The remaining seven might be from the other units of the prison. According to this report 23 prisoners were scheduled to be executed in this prison on Wednesday, but eight of them were not executed.

According to Kurdistan Human Rights Network (KHRN) six prisoners have been executed in the prison of Urmia during the past two days. Two Prisoners charged with murder and sentenced to "Qesas" and four prisoners charged with drug trafficking were hanged in Orumiyeh Central Prison, from 2 to 4 March, reported KHRN.

None of the above mentioned executions have been announced by the official Iranian sources.