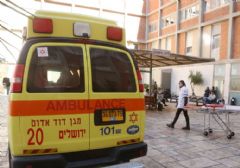 A female terrorist attempted to stab a soldier at the Afula central bus station Friday afternoon, in the fourth stabbing incident in under four hours.

Initial findings revealed that the female terrorist made her way inside the central bus station, and pulled out her knife by a soldier on the platform.

Upon identifying the threat, two Border Police officers opened fire at the terrorist, shooting towards her lower body in order to neutralize her.

She is being treated for moderate wounds.

Police forces on site are scanning the area for further potential threats. The scene has been closed off, and the public is advised to stay away from the bus terminal.