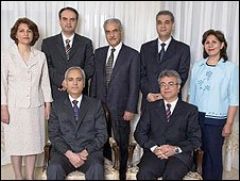 It is not clear how long the trial of the seven Bahais will last
(Source: BBC)

Another round of scape -goating of Iran's Ba -ha'is by the theocratic regime started last week with a show trial of the seven men and women that make up the ad hoc coordinating body of the Iranian Baha'is - the country's largest religious minority. Charged with stirring up all the unrest sweeping the country today,Iran's 300,000 Baha'is find themselves in serious jeopardy.

As President Obama tries to tackle the troubling issue of America's relations with Iran, he should keep the prayer for America that has been officially enshrined in Baha'i prayer books as his moral compass:

"Oh, God, let this American democracy become glorious in spiritual degrees and render this just government victorious. Confirm this revered nation to upraise the standard of the oneness of humanity, to promulgate the Most Great Peace, to become thereby most glorious and praiseworthy among all the nations of the world. Oh, God, this American nation is worthy of Thy favors and is deserving of Thy mercy."

The prayer itself was delivered in Chicago on April 30, 1912, by 'Abdu'l-Baha, the son of the prophet-founder of the Baha'i faith, Baha'u'llah, who was visiting the United States at the behest of the nascent Baha'i community in America. Since then, the Baha'i community has been able to flourish in America because of the protections granted by our Constitution.

The opposite has been true in Iran, the birthplace of the Baha'i faith. Baha'is in Iran have been subject to harassment, torture and execution from the faith's inception in the mid-1800s. Muslim clerics in Iran have always felt threatened by the core principles of the Baha'i faith, principles that are in many respects similar to America's core spiritual and social values: the abandonment of all forms of prejudice, the elimination of the extremes of wealth and poverty, universal education and gender equality, among others.

According to the State Department, these seven men and women are in immediate danger. Detained last spring on baseless charges of espionage for Israel, insulting religious sanctities, and propaganda against the Islamic republic, they face trials with a pre-ordained ending. Despite lack of evidence to back up the charges, these individuals have been refused access to their legal counsel, Nobel laureate Shirin Ebadi, who, likewise, has been denied access to their files, and has been harassed, intimidated and threatened since taking their case.

But the Baha'is are not the only ones facing persecution in Iran. Since the establishment of the Islamic republic, the regime has acted as an equal-opportunity persecutor, arresting and violating the basic rights of Christians, Jews, Sunni Muslims, ethnic minorities, students, human rights activists and journalists, to name a few. While the human rights violations that intensified during the Islamic revolution in 1979 subsided somewhat in the 1990s, they have spiked since President Mahmoud Ahmadinejad and his allies in the Revolutionary Guards stole the election in 2009. Even Ayatollah Hossein Kazemeyni Boroujerdi - outspoken in his opposition to the Islamic republic and an advocate of the separation of Islam from politics - has been arrested and held in solitary confinement.

The trial of the seven Baha'is is another grave example of the regime's terrorization of communities that threaten their power. In the case of the Baha'is, its message of equality, its lack of clergy, and its alarming spread throughout Persia during its inception provoked the clergy to pressure the Qajar Shah to send its founder Baha'u'llah into exile in 1853. For the remainder of his life, Baha'u'llah remained a prisoner, banished successively throughout the Ottoman Empire. He finally ended up in present-day northern Israel, where he passed away and his remains are interred. As a result, it became the spiritual and administrative center of the Baha'i faith some decades before the establishment of the state of Israel.

The irony of these series of events has conveniently gotten lost in fiery rhetoric of Iranian officials' accusations. The very government that accuses Baha'is of spying for Israel conveniently ignores the historic fact that the administrative and spiritual center of the Baha'i faith was established long before the creation of what the mullahs in Iran call "occupied Palestine." It is not surprising, therefore, that the European Union, and now the State Department, are calling for their immediate release because spying is a crime that carries the death sentence in Iran.

'Abdu'l-Baha invoked God's name in his special prayer for America because he, much like Alexis de Tocqueville before him, recognized that America is a good nation because it is a moral nation. As President Obama crafts America's policy towards Iran by offering its leaders a change from his predecessor's "axis of evil" approach, he should also remind Iran's clerical rulers that we will not forgo America's core principles of respect for human rights, religious pluralism and tolerance.