U.N. Inaction on Bangladesh
All Actions of the UN Human Rights System Critical of Specific States, 2007 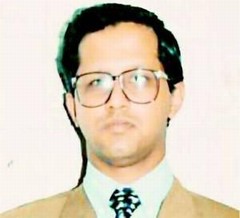 Mr. Salah Uddin Shoaib Choudhury is a Bangladeshi journalist facing a death sentence on charges of blasphemy, sedition, treason and espionage. His crime? He tried to attend a writers' conference in Tel Aviv on how to foster world peace.

In October 2006 we featured an article reporting that was imprisoned and tortured for his beliefs. Now Mr. Choudhury has voluntarily returned to Bangladesh to await trial on August 17th, at which time he could be sentenced to death, rather than live in exile.

"When the Bangladeshi journalist Salah Uddin Shoaib Choudhury, a Muslim who edits the Weekly Blitz, an English-language newspaper in Bangladesh, set out for the airport to fly to America last Sunday, his wife asked him whether she should pack two suitcases: one for if he was allowed onto the plane, a second containing a set of clothes for prison, in case he was arrested for attempting to leave.

...Mr. Choudhury served 17 days in jail in 2003 when he tried to travel to Israel to attend a religious conference. He was put in isolation, beaten, and harassed.

..."I am proud to be a Muslim Zionist," Mr. Choudhury said. "My family raised me to be tolerant of other religions."

Mr. Choudhury said Bangladesh is swiftly moving in favor of Islamic extremists. He spoke of the increase in financial support from Saudis for Muslim financial and educational institutions in Bangladesh.

According to Mr. Choudhury, the people of Bangladesh are not critical of America. The government, however, which he described as "extremely radical," harbors deep resentment towards America.

He is currently awaiting trial, which has been postponed five times in the past seven months. His lawyer, Irwin Cotler, said that over that time Mr. Choudhury has endured nine major violations of his pretrial rights guaranteed by the Bangladeshi Constitution.

"His government says that he is a member of Mossad," Mr. Cotler, who defended a leading Egyptian advocate of democracy, Saad Iddin Ibrahim, said. "That is the universal vernacular when the government does not have any substantiating evidence."