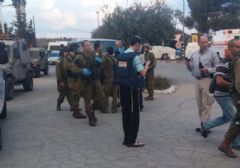 Palestinian terrorist stabbed a mother of eight in the back at the Gush Etzion junction late Wednesday afternoon.

Nirit Zimora, of the Beit Hagai settlement in the South Hebron Hills, was rushed to Shaare Zedek Medical Center in Jerusalem with the knife still in her back.

She underwent surgery and was listed in satisfactory condition.

Security forces surrounded and arrested the terrorist. This is the third attack in the Gush Etzion region since Sunday and the second at that junction.

On Tuesday, soldiers killed two Palestinian terrorists who stabbed a 19-year-old soldier in the face at a bus stop.

Wednesday's attack occurred just outside the parking lot of the Rami Levi supermarket, in an area that is often considered an oasis of coexistence. Palestinian and Israelis shop and work in its stores, particularly Rami Levi.

The head of the parking lot's security, Daniel Twizer, said the Palestinian man arrived at the junction in a cab and approached the parking lot beside the Rami Levi supermarket.

He apparently intended to enter the lot, but was scared off by its guard in front of the lot, Twizer speculated.

Instead, he attacked the first woman he saw. The knife's handle broke from the force of the blow and the knife remained in her back, Twizer said.

The Rami Levi security guard saw the stabbing and ran in their direction, shouting "terrorist."

Soldiers and other bystanders joined him in confronting the attacker.

The terrorist grabbed the woman and held her in front of him, trying to prevent the guard from shooting him. He then let her go and ran in the direction of the road, where he was caught.

Bystanders placed the wounded Zimora into a nearby car and Twizer went to help her. "I looked to see if there were any other wounds," he said, adding that there were none.

He and security guards searched the area to make sure the suspect had no accomplices.

Following the attack, the staff of the junction's Rosa restaurant published a short video on WhatsApp in which they urged customers not to be afraid and to continue to come to the shopping center.

Gush Etzion Regional Council head Davidi Perl said the terrorist had taken advantage of the lifestyle of coexistence at the shopping center to attack an innocent woman.

He called on the Israeli government to move from a defensive stance into an offensive one, to prevent such attacks from becoming a new and dangerous norm.

Earlier in Hebron, soldiers killed a Palestinian wouldbe stabber who drew a knife on them just outside the Tel Rumeida neighborhood, close to where soldiers killed another knife-wielding terrorist the day before.