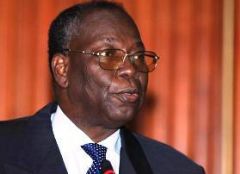 Communications Minister Issa Tchiroma Bakary said the attack occurred early Sunday morning in the town of Kolofata, in the Far North Region. He said the fighters targeted the home of Vice Prime Minister Amadou Ali as well as a local traditional chief.

He could not provide the exact numbers of people killed and kidnapped because he was still gathering information about the attack. But he confirmed that Ali's wife was among those kidnapped.

Cameroon's government has become increasingly involved in regional efforts to combat Boko Haram, despite warnings from the armed group to stay out of its fight with the Nigerian military or risk further attacks.