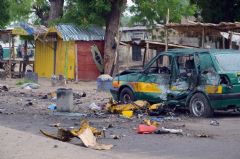 The scene of an Improvised Explosive Device (IED) blast at Gomboru market in Maiduguri, Borno State in northeastern Nigeria on July 31, 2015 (AFP Photo/Str)

Suspected Boko Haram gunmen on horseback shot dead nearly 80 people in attacks on three villages in Nigeria's restive northeast at the weekend, a vigilante and residents told AFP on Monday.

The attacks were the latest bloodbath in the six-year-old insurgency by the extremist group aimed at carving out an Islamic state in the volatile region.

Babakura Kolo, a vigilante fighting Boko Haram, said 68 people were killed in the attack on Baanu village in Borno state late on Friday while residents said another 11 people were shot dead in two other villages on Saturday and Sunday.

"Reports reached us of an attack on Baanu village late Friday where Boko Haram gunmen riding on horses opened fire on the village. Sixty-eight people were killed in the attack," Kolo told AFP.

He said the gunmen stormed Baanu around 8.30 pm (1930 GMT), shooting sporadically. Baanu resident Aisami Ari who fled the attack to the state capital Maiduguri on Saturday, also confirmed the attack and the death toll.

"The attackers came on horses around 8.30 pm and began shooting sporadically. The whole village was thrown into confusion and everybody fled. We returned after they had gone and found out they had killed 68 people in the village," he said.

"Most of us left the village on Saturday for fear of a fresh attack," he added.

A government official, who demanded anonymity, however put the death toll in Baanu at 56.

Kolo also said four people were killed in another attack by the Islamists in Karnuwa village on Saturday.

"They shot dead four people in the village, including the chief imam of the village, his son and two neighbours," he said.

Local resident Saleh Musa told AFP of a third attack on Hambagda on Sunday where they killed seven villagers and injured five others.

"The attackers arrived on horseback around 2:00 pm while people were praying in the mosque. They went straight to the mosque and opened fire on worshippers," said Musa who later fled to the nearby town of Askira Uba.

"They killed seven people, while five others were injured. I was late for the afternoon prayers and I was at home preparing to go to the mosque and join in the prayers when the attack happened."

Army spokesman in Maiduguri, Colonel Tukur Gusau, and Borno government spokesman Isa Umar Gusau said they could not immediately comment on the attacks.

Boko Haram has stepped up its attacks since Nigeria's new President Muhammadu Buhari was sworn in on May 29, vowing to crush the insurgency.

The wave of violence since the inauguration has claimed more than 1,000 lives, dealing a blow to a four-country offensive launched in February that had chalked up a number of victories against the hardline Islamists.

The extremists have carried out deadly ambushes across Nigeria's borders and in recent weeks suicide bombers, many of them women, have staged several attacks in Nigeria, Cameroon and Chad.

Boko Haram, which is seeking to carve out a hardline Islamic state in northeast Nigeria, has killed some 15,000 people and displaced 1.5 million since 2009.

An 8,700-strong Multi-National Joint Task Force, drawing in Nigeria, Niger, Chad, Cameroon and Benin, is expected to deploy against the insurgents soon.