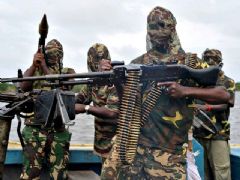 On Friday, a day after outgoing President Goodluck Jonathan rejected help from the UN, Boko Haram slashed the throats of twelve people in northeast Nigeria while the army evacuated the civilians. Terrorists then slaughtered 10 civilians in Cameroon.

"Just as troops were trying to evacuate some civilians from the hills so as to safeguard them from a planned air strike ... some Boko Haram attacked them and slit the throats of 12 people," claimed one military source.

The Nigerian armyâ with help from Chad, Niger, and Cameroonâ managed to eradicate most Boko Haram militants from Gwoza, but a few remained behind. Jonas Musa lost his parents in one attack. He told Reuters the soldiers "moved one wave of people from the hills around Gwoza, but before they could go back for the second, the attackers struck."

"It was unfortunate that while they were kept at a supposed safer place at the base of the hill, with some (military) troops stationed there to guard them, some Boko Haram men struck on Wednesday, and killed at least 11 of the people," stated another source.

"Boko Haram attacked the village of Bia overnight" a source told the AFP. "The toll is 10 civilians killed and a large number of livestock stolen."

Militants also attacked the Cameroon army in Amchide, which is on Nigeria's border.

"They burned houses in Amchide, but without losses on our side," described a security source. "The attack was repulsed. We don't know yet about casualties on the enemy side."

On Thursday, Jonathan met with representatives from the United Nations. He claimed the Nigerian army has a grasp on Boko Haram and does not require more troops. Instead, he told the UN the organization should help Nigerians who are affected by the terrorist group. He "urged the United Nations to focus more on helping Nigeria with the rehabilitation and reconstruction of persons and communities affected by terrorism in northern Nigeria rather than deploying an international force."