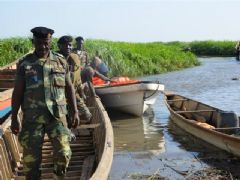 The massacre took place last Monday, but the news was released only yesterday because the area of Lake Chad is devoid of any type of telephone; survivors had to reach Maiduguri, the capital of Borno state, to raise the alarm.

Earlier reports stated that ten men were killed, but the number has since been adjusted upward. According to Abubakar Gamandi, head of the fishermen's union in Borno State, on Monday around 4 pm "Boko Haram attacked three villages on the shores of Lake Chad where they slaughtered 10 people, all of them fishermen."

"Boko Haram decided not to use guns so as not to attract the attention of soldiers from Baga. This is why they used knives to slaughter their victims," Gamandi said.

The victims are all citizens of Chad, where in recent months there have been numerous attacks by Islamist radicals.

Bishop Rosario Pio Ramolo, of the diocese of GorÃ© in the south of Chad, said that in the last few months "attacks have multiplied in Chad, causing the more than seventy deaths and two hundred wounded." The violence has occurred mainly in the capital N'Djamena and in the areas bordering Nigeria.

The increase in such incidents is thought to be a retaliation for actions taken by the Chadian government against Boko Haram, particularly in the area around Lake Chad, whose waters reach Nigeria, Chad and Cameroon.

"The Chadian President Idriss Deby has declared open war against the Islamists,' said Bishop Ramolo, "and these acts represent an attempt at revenge. Before now the extremists had not acted in Chad, despite being on the border with Nigeria."

Clothing covering all or part of the face, such as the burqa or hijab, the Islamic veil, has been prohibited.

As of last Wednesday, the mayor of N'Djamena illegalized begging for security reasons.

On Friday, Chadian troops killed 117 Boko Haram fighters in an operation against the jihadists hiding on the islands of Lake Chad, according to reports from authorities.

"One hundred seventeen terrorists have been killed, two Chadian soldiers died and two others were wounded in the operation against the Nigeria-based movement, which began two weeks ago," said Chadian army spokesman, Col. Azem Bermendoa Agouna.

In Nigeria, Boko Haram struck out as well Friday, with a female suicide bomber on a tricycle killing six people in a crowded market in Maiduguri, in the Nigerian northeast.

Nigerian President Muhammadu Buhari, who won the election in March this year on a promise to crush the radical Islamist group, said Friday that a new 8,700-soldier task force would "lead to the speedy defeat and elimination of Boko Haram."