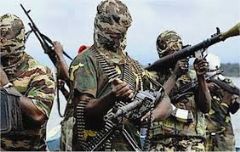 Boko Haram rebels have tightened their grip over a 1,200-square-mile swath of northern Nigeria's most mountainous and formidable terrain, as motorcycle-riding fighters carried out a weeklong series of raids on villages that killed nearly 200 people, residents said on Thursday.

In a pattern of attacks that began May 30, the Islamist insurgents stormed through five villages in the Gwoza region, firing automatic weapons into houses and killing at least 100 people, including Idrissa Timta, a prominent Muslim leader, said two residents and an official with a local self-defense force.

Then on Wednesday, they struck the outskirts of Maiduguri, the largest and most fortified city in Nigeria's northeastern corner. They killed 48 people in the village of Kayamla, a resident said, followed a day later by an attack on Bagari, where an additional 45 people were slain, the official said.

"They have gone through the village and burned all the houses," the official said.

Nigerian President Goodluck Jonathan reiterated his vow last week to purge the West African nation of terrorists. "These thugs will be driven away," he said.

But at the moment, it is Boko Haram that is cleansing the countryside, driving away any Nigerian opposed to its campaign to carve out a fundamentalist holy land inside Africa's most populous country.

Details of Boko Haram's attacks are often slow to filter out from Nigeria's chaotic and remote northeast.

Still, the method of its latest military operations described by witnesses suggest its fighters are making major progress in imposing its control over Gwoza, a region on the border with Cameroon roughly the size of Rhode Island.

The villages of the heavily forested area, once home to some 300,000 people, have been abandoned or given in to Boko Haram rule. A top regional official fled home in terror and now lives in a hotel. "If they get me, they will kill me," the official said.

The growing tide of violence and coercion has uprooted 800 Nigerians a day from their homes, said the Internal Displacement Monitoring Center, a research unit of the Norwegian Refugee Council.

More than half of northeastern Nigeria's farmers have left their fields behind, the center said. In all, 3.3 million people have fled Boko Haram's attacks since the conflict began in 2009, Nigeria's National Commission for Refugees said.

Many of those who remain live in villages that are under the sway of Boko Haram, which recruits boys at gunpoint to fight and takes girls to serve as their wives, human-rights activists say.

On April 14, in its most notorious attack, Boko Haram abducted 276 teenage girls at a boarding school the night before final exams. At least 53 of them later escaped. Military leaders have cited another reason to exercise restraint: Boko Haram is thought to be holding some of the kidnapped schoolgirls in Gwoza.

Meanwhile, any attempt by Nigeria's military to assert control faces several obstacles. Troops complain they aren't equipped to confront one of Africa's most heavily armed insurgencies.They are armed with lightweight assault rifles and communicate by mobile phones over some of Africa's most unreliable cell networks.

"We can't go and kill our girls in the name of trying to get them back," Nigeria's defense chief, Alex Barde, told protesters on May 26.