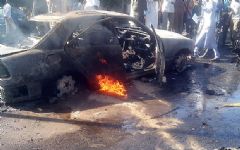 A previous bombing in the Nigerian city of Maiduguri, in January 2014

At least 55 people were killed by three bomb blasts in the northeastern Nigerian city of Maiduguri on Sunday, according to a local hospital official.

The bombs that detonated at about 7:20 p.m. also injured 85 people, Tunde Sotanmi, the security chief of the State Specialist Hospital Maiduguri, told reporters in the city on Monday. Casualties may continue to rise, he said.

Nigerian army spokesman Colonel Sani Usman confirmed the attacks, though said details weren't immediately clear. The explosives were detonated at a mosque, a dining area and an computer center, according to Hassan Ibrahim, a local pro-government militia member in the city.

"The attacks signify a high level of desperation on the part of the Boko Haram terrorists," Usman said in a statement on Monday. "There is need for more vigilance, security consciousness and prompt reporting of suspicious persons or group of persons in their midst."

No one immediately claimed responsibility for the attacks. Boko Haram militant leader Abubakar Shekau said in an unverified audio recording posted over the weekend that Nigerian authorities aren't winning a six-year war against the insurgent group.

Nigeria's military said Sept. 19 it "captured" the villages of Jerre and Dipchari in northeast Borno State and rescued 62 people fleeing from Bitti and Pulka villages as it pushed "for the final defeat of the Boko Haram terrorists." President Muhammadu Buhari, who came to power in May, has ordered the armed forces to end the insurgency by mid-November.