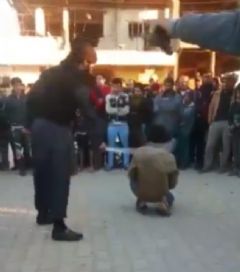 A screen grab from video showing boy being whipped

This horrifying clip shows a child unflinchingly receive 60 lashes to his back for simply referring to Islamic State by a term they hate: 'Daesh'.

As dozens gather around the town square to watch with emotionless expressions, the boy kneels on the ground - purportedly in Anbar, Iraq - as he accepts his penalty.

His punisher relentlessly whips the boy in the short clip, who appears to be crying and pleading for mercy.

The child's crime was to refer to the terror group as 'Daesh' - a loose acronym for the Islamic State of Iraq and Syria (al-Dawla Al-Islamiya al-Iraq al-Sham).

The term is used by enemies of ISIS and has negative undertones, as it sounds similar to Arabic words which mean 'one who crushes something underfoot' and 'one who sows discord'.

The video of the barbaric punishment was posted to Facebook on Tuesday and has been viewed thousands of times.