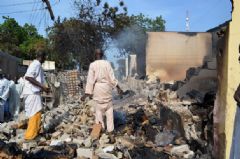 The Islamist armed groups' attacks have been increasingly deadly and sophisticated, killing more than 200 civilians in the past three weeks

Carnage in northern Nigeria amounts to crimes against humanity

Attacks by Islamist armed groups that have killed more than 200 people in recent weeks in northern Nigeria have been increasingly deadly and sophisticated, and amount to crimes against humanity, Amnesty International said.

On 15 February, more than 100 people were reportedly killed and hundreds of houses burnt as gunmen attacked Baga and Izge villages in Borno state. It is just the latest in a series of attacks the organization has documented there and in neighbouring Adamawa state over the past three weeks.

"These killings and the systematic campaign by armed groups targeting ordinary people constitute crimes against humanity. Perpetrators of these alleged crimes, including the leaders of the armed groups who are responsible, must be brought to justice in fair trials," said Makmid Kamara, Nigeria Researcher at Amnesty International.

On Tuesday 11 February, unknown gunmen killed more than 50 people and burnt scores of homes in the village of Konduga, also in Borno state. Two eyewitnesses in Konduga village told Amnesty International that between 30 to 40 girls were abducted and taken away by the gunmen during the attack on a government-run secondary school in the village. The Chief Nursing Officer of the General Hospital in Konduga was also reportedly kidnapped by the gunmen. Their whereabouts is still unknown.

Similar attacks have taken place in villages in Adamawa and Yobe states, leaving scores dead, injured and forcibly displaced. No group has claimed responsibility. "The extension of the state of emergency has not helped to reduce the violence in northern Nigeria. Scores are dead, hundreds of families have been separated and many people have been forced to flee their homes," said Makmid Kamara.

"We are particularly concerned about the lack of safety and security, especially for children, the elderly and women. The Nigerian government must take effective measures to provide better security and prevent further human rights abuses."