U.N. Inaction on Yemen
All Actions of the UN Human Rights System Critical of Specific States, 2009 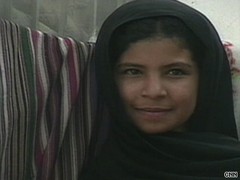 Nujood Ali today is angry and skips school but is still relieved her defiance paid off.
Source: CNN

SANA'A, Yemen (CNN) -- It is midday and girls are flooding out of school, but Nujood Ali is not among them.

We find her at the family's two-room house in an impoverished suburb of the city where Nujood is angry, combative and yelling. Tension surrounds the home like a noose.

After much arguing with family members, Nujood finally grabs her veil and agrees to sit down with CNN. Her presence is grudging, although CNN had got permission in advance to see how the girl who rocked a nation by demanding a divorce was shaping up.

Nujood is very different from the girl we first met nearly two years ago. Then, there was no doubt the 10-year-old was every inch a child. She was the very portrait of innocence: A shy smile, a playful nature and a whimsical giggle.

That picture was very much at odds with the brutal story of abuse she endured as a child bride who fought for a divorce and is now still fighting.

Nujood says she remains relieved and gratified that her act of defiance -- which led to appearances at awards shows and on TV -- had paid off.

The story was supposed to end with the divorce and an innocent but determined girl allowed to fully embrace the childhood she fought so hard to keep.

Instead, there has been no fairytale ending for Nujood. There was, though, a stunning transformation. Nujood went from being a victim and child bride to a portrait of courage and triumph. Her inspirational story was told and re-told around the world, but at home all was not well.

In the fall of 2008 Nujood was recognized as Glamour Magazine's Woman of the Year, alongside some of the world's most impressive women. She even attended the ceremony in New York and was applauded by women from Hillary Clinton to Nicole Kidman.

There is a tell-all book which is to be published in more than 20 languages, and the author says Nujood will receive a good portion of the royalties.

Nujood's strength was celebrated by complete strangers. But what did all the fame do for the one person it was meant to transform? "There is no change at all since going on television. I hoped there was someone to help us, but we didn't find anyone to help us. It hasn't changed a thing. They said they were going to help me and no one has helped me. I wish I had never spoken to the media," Nujood says bitterly.

There was never going to be a fortune. Generous people have donated thousands so Nujood could go to a private school, but she refuses to attend, according to Shada Nasser, the human rights lawyer who took on the child's divorce case.

She believes Nujood is being victimized by her own family because they believe Nujood's fame should bring them fortune. Nujood's parents say they've received nothing, and in the meantime Nujood stews wondering out loud how everything turned out this way.

"I was happy I got divorced but I'm sad about the way it turned out after I went on television," she said adding that she feels like an outcast even among her family and friends.

Nujood was pulled out of school in early 2008 and married off by her own parents to a man she says was old and ugly. And yet, as a wife, Nujood was spared nothing.

"I didn't want to sleep with him but he forced me to, he hit me, insulted me" said Nujood. She said being married and living as a wife at such a young age was sheer torture.

Nujood described how she was beaten and raped and how, after just a few weeks of marriage, she turned to her family to try to escape the arrangement. But her parents told her they could not protect her, that she belonged to her husband now and had to accept her fate.

CNN tried to obtain comment from Nujood's husband and his family but they declined.

Nujood's parents, like many others in Yemen, struck a social bargain. More than half of all young Yemeni girls are married off before the age of 18, many times to older men, some with more than one wife.

It means the girls are no longer a financial or moral burden to their parents. But Nujood's parents say they did not expect Nujood's new husband to demand sex from his child bride. To escape, Nujood hailed a taxi -- for the first time in her life -- to get across town to the central courthouse where she sat on a bench and demanded to see a judge.

After several hours, a judge finally went to see her. "And he asked me, 'what do you want' and I said 'I want a divorce' and he said 'you're married?' And I said 'yes.'" says Nujood. Nujood's father and husband were arrested until the divorce hearing, and Nujood was put in the care of Nasser.

Indeed, it seems the judge had heard enough of the abuse to agree with Nujood that she should get her divorce.

But based on the principles of Shariah law, her husband was compensated, not prosecuted. Nujood was ordered to pay him more than $200 -- a huge amount in a country where the United Nations Development Programme says 15.7 percent of the population lives on less than $1 a day.

Khadije Al Salame is working to help Nujood get her life back. Now a Yemeni diplomat, 30 years ago she too was a child bride. But when she left her husband, she did not have to endure the publicity that now haunts Nujood.

She said: "It's good to talk about Nujood and to have her story come out, but the problem is it's too much pressure on her. "She doesn't understand what's going on. She's a little girl and we have to understand as a media people that we should leave her alone now. If we really love Nujood then we should just let her go to school and continue with her life, because education is the most important thing for her."

To get her divorce, Nujood showed a character and strength not easily expressed by women in Yemen, let alone a 10-year-old child bride. But she will need to muster all that strength and more if she's to finally reclaim her life.

Nujood told us she thought the divorce would be the end of her struggle and she's still angry that it turned out to be just the beginning.