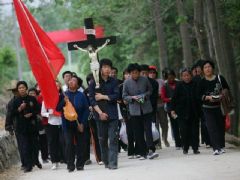 A prominent Christian church leader has become the latest to be jailed by Chinese courts during a week of activist trials and public confessions that have shocked international observers.

Hu Shigen, a leader of an underground church movement, was found guilty of subversion, sentenced to seven years and six months' imprisonment and derived of political rights for five years.

Previously, Hu spent 16 years in prison for other political offences, including sharing leaflets about China's 1989 crackdown on protesters in Tiananmen Square.

A Chinese court in Tianjin, 60 miles south-east of Beijing, is this week rolling out a string of court sentences against rights activists and lawyers that observers claim have almost zero credibility.

Police rounded them up more than a year ago, held them in secret detention and later arrested several on subversion charges. Families of those arrested say they've had no access to their relatives. China Human Rights Defenders, a non-profit organisation with its headquarters in Washington DC, says the detentions and trials make a mockery of China's oft-stated commitment to rule of law.

China claims that those facing trials, including lawyers in the Fengrui law firm, conspired to overthrow the Chinese Communist party. State media on Wednesday said Hu confessed to being deeply connected to "foreign anti-China forces" and had conspired with members of the Fengrui firm about "how to get lawyers involved with sensitive incidents".

On Monday, state media reported that rights activist Zhai Yamin had confessed to subversion and was given a suspended three-year prison sentence. A day earlier, a prominent lawyer in the Fengrui firm, Wang Yu, appeared in a videotaped interview, blaming "foreign forces" for influencing the firm's activities. Wang has reportedly been released on bail.

Jerome Cohen, an expert on Chinese law at New York University, said Wang probably agreed to do the interview to protect her teenage son and husband, who is in detention and faces subversion charges himself.

"To say that her statement was 'probably' the product of coercion is silly since she has been held in an immensely coercive environment for over a year," Cohen wrote in a blogpost on Wednesday. "These 'confessions' are reminiscent of the 'brainwashing' era of the 1950s for which the new China became infamous."

This week, the Chinese artist Ai Weiwei has started posting videos mocking what he sees as a clumsy attempts by China to manufacture "confessions" from activists such as Wang.

In her interview, Wang is seen saying she "will not acknowledge, will not recognise and will not accept' an international award she received last year, while in detention. In response, Ai Weiwei's video shows him repeating the same language, over and over.

Other analysts have noted that the phrase "will not acknowledge, will not recognise, will not accept" is the same wording China used after a tribunal in The Hague last month that Beijing had violated international law in the South China Sea.