U.N. Inaction on Kenya
All Actions of the UN Human Rights System Critical of Specific States, 2015 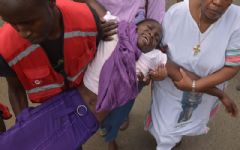 A survivor of the massacre

Less than 200 miles from Garissa, Kenya's elite police commandos prepared to head out as soon as they got word of the university attack. So why did it take them 15 hours to arrive?

And the 140 other innocents murdered last week by four al-Shabaab gunmen at Garissa University College in Kenya during the 15 hours before police commandos finally reached the scene.

Fifteen minutes after the American-trained commandos moved in, the terrorists were dead and the attack was over.

That's right-15 hours to get there and 15 minutes to end it.

Some of the names and faces of the students who had been murdered in the meantime can be seen on Twitter via the hashtag #147notjustanumber. They include 21-year-old linguistics major Elizabeth Musinai.

The gunmen used Musinai's cellphone to call her family when she was still alive four hours after the attack began. The gunmen reportedly gave the family two minutes to contact President Uhuru Kenyatta and get him to promise to withdraw the Kenyan army from Somalia.

"Listen to how we are killing your daughter," a gunman reportedly told the family after the wildly impossible deadline lapsed.

The family heard three gunshots. Her body was among those later identified at the morgue. The family began making burial preparations as many people began asking why help had been so long in coming.

The attack had begun at 5:30 a.m., and word reached the commandos a half-hour later at their base in Ruiru just outside Nairobi, some 175 miles from Garissa.

The commandos, formally known as the Recce Squad of the General Services Unit, immediately began preparing to head out, just as they had in 2013 when they got word of an attack on the Westgate Mall in Nairobi.

In that earlier attack, they had been held on standby for an hour before they were dispatched. They had entered the mall only to be fired upon by the Kenyan military.

The commandos had withdrawn with one dead and several wounded by friendly fire. They had watched the military finish the job with too much force that had too little effect over much too long a time. The gunmen in the meantime killed more than 60 innocents.

After the Westgate attack, President Kenyatta did make known his appreciation for the commandos. He visited them in Ruiru for a feast that included the sacrifice of a bull.

To be thus honored did not spare the commandos from being left to live without electricity for three months in 2014, when power at their base was cut. Some officers believed it was an effort to keep them from charging-and therefore from using-their cellphones.

"We think it's an intentional act since most of us engage much on social media," one officer was quoted telling a Kenyan newspaper. "Social media has taken center stage, which seems to bother the bosses. It is our right to know what is trending."

But by various accounts, the commandos did not let such pettiness keep them from immediately making ready when they got word of the attack on the university in Garissa early on the morning of April 2.

Yet however raring to go they may have been, they are said to have been kept on standby until nearly midday.

When they finally did get the green light, they encountered heavy traffic that delayed them for at least an hour on the way to Wilson Airport outside Nairobi.

And the two available planes could only carry 18 of the 24 members of the team.

A third plane that could have carried the others had already departed with Inspector-General of Police Wilson Boinnet and Interior Ministry Secretary Joseph Nkaissery. The two officials had flown to Garissa to announce that the situation was well in hand.

The remaining commandos and their equipment had to drive five hours to the scene of the attack.

By the time they arrived and everybody was briefed, the attack had been going on for 15 hours.

The Kenyan military had chosen to limit itself this time to forming a perimeter around the building where the gunmen were holed up, firing on the soldiers from an upper floor.

The commandos had no sooner arrived than they charged through a back door and headed up the stairs.

In as little as 12 minutes, the four gunmen had been killed. The 147 dead students were beyond rescuing.

"The #GarissaSiege is over," Boinnet now tweeted. "Our joint security forces responded commendably. I regret the loss of so many young lives."

The dead terrorists included Abdirahman Mohamed Abdullahi, a twentysomething fledgling lawyer who had been considered uncommonly bright. His father was both a chief and a prominent government official.

Abdullahi is said to have been working as a legal officer at a bank in 2013 when his family reported him missing. The family reportedly told the police that they suspected he had slipped away to join al-Shabaab.

"If it is true he is one among the killed terrorists, we wish worse should have happened to him," a family member was quoted saying after it was reported that he had taken part in the university attack. "We pray he pays for his callous sins in the afterlife."

Amid questions about the delay, Kenyan authorities announced that they were assigning two helicopters to the commandos that had previously been used by the country's Wildlife Service and Forest Service. They will now be able to chopper to the scene after however long they are kept on standby.

Electricity has been restored at the base in Ruiru for several months now. And the commandos can check #147notjustanumber on Twitter and see the names and faces of the students they might have been able to save if they had been immediately dispatched. Elizabeth Musinai was still alive more than six hours after the attack began, at least 3 1/2 hours after the commandos could have been there.

Foremost on the minds of the commandos must be the comrade who was killed when they were finally able to storm the building. Corporal Bernard Tonui had reportedly received counterterrorism training in the United States. He had called his wife when the commandos were finally dispatched to Garissa. He is said to have told her he would call again after the operation was concluded.

"He was a loving husband and father who always kept in touch to know how we are faring at home," his wife, Nelly, later told a Kenyan newspaper.

His grieving parents reported that one of his bothers, Police Officer Joseph Bett, had also been killed by al-Shabaab, also in Garissa, in 2012.

"The death of my son has shocked us to the core as we are yet to come to terms with the death of my other son," the father, Simon Sanga, told a Kenyan reporter.