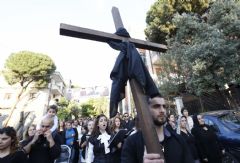 Assyrian Christians, who fled unrest in Syria, carry a cross outside St. Georges Cathedral in Jdeideh, in Beirut. Aramaic-speaking Assyrians are being driven from Syria and Iraq by war and the militant Islamic State group. (Anwar Amro/AFP/Getty Images)

Suhail Gabriel was in bed when Islamic State militants stormed his village in eastern Syria, firing machine guns and rocket-propelled grenades. Gabriel rushed his wife and daughter onto his motorcycle and sped through the early morning darkness, he later recalled.

"We left in our pajamas," Gabriel said. "We didn't even have time to put on clothes."

He was among the thousands of people from an ancient community of Christians, known as Assyrians, who fled 35 farming villages in Syria's Khabur River area in February because of attacks by the extremist Sunni Muslim group. The militants desecrated churches and religious symbols during the offensive and kidnapped about 250 of the Assyrians, including women and children.

Over the last decade, Assyrians have joined waves of Christians who have fled Syria and Iraq because of war and persecution by extremist Muslims. But the latest attacks have added to concerns that this unique Mesopotamian people are in danger of disappearing from the region.

Assyrians in Iraq and Syria belong to the last communities of significant size to speak the language of Jesus - Aramaic. Many of them are being forced to move outside the Middle East, where it becomes less likely the tongue will be maintained, said Eden Naby, a Middle East historian and expert on Assyrian culture.

Aramaic is the oldest continuously written and spoken language in the Middle East, she said. It was once also used by some other religious communities, including Jews. Now, "Assyrians remain the last Aramaic-speaking of people of the world. So the disappearance and displacement of these people pretty much spells the closing chapter of Aramaic use in the world," Naby said.

Assyrians, also referred to as Chaldeans or Syriacs, consider themselves ethnically distinct from Arabs and Kurds, tracing back their roots in the region 6,500 years. They speak a modern dialect of what was the lingua franca of the Assyrian Empire.

Among the earliest people to convert to Christianity, Assyrians mostly belong to four Eastern Rite churches, whose founders are said to have included the 1st century apostles Thomas, Thaddeus and Bartholomew.

Though there are groups of Assyrians scattered around Lebanon and Turkey, the core of their community has lived in Iraq and Syria. The number of Assyrians in Iraq has plunged from about 1.4 million in the late 1980s to an estimated 400,000, with many migrating abroad because of the unrest produced by the U.S. invasion that toppled Saddam Hussein in 2003. In Syria, Assyrians are estimated to total less than 40,000 people. Many of them have been forced by the Islamic State to flee to Kurdish-controlled areas in the eastern part of the country.

"What we have faced is atrocity after atrocity," said Habib Afram, head of the Syriac League in Lebanon, which represents regional Assyrian issues.

He referred to scores of attacks perpetrated against Assyrians in recent years, including the murder of an archbishop in the northern Iraqi city of Mosul in 2008; the bombing of an Assyrian church in Baghdad in 2010 that killed nearly 60 people; and the recent kidnapping of two bishops in Aleppo, Syria's largest city.

"They don't want to just take your land or kick you out of your villages - they want to erase your past, your heritage," he said.

When Islamic State militants swept through northern Iraq in June, thousands of Assyrians were pushed out of Mosul and other areas.

A history of hardship

Long before Syria's civil war and the rise of the Islamic State, Assyrians faced persecution. At least a half a million Assyrians perished during the slaughter by Ottoman Turks of Armenians and other minorities during World War I, a massacre that many historians consider a genocide.

Nowadays, more than two-thirds of Assyrians are believed to live in countries like the United States, Sweden and Australia. Few schools teach Aramaic in these places, contributing to the language's disappearance, said Naby, the expert on Assyrian culture.

She noted that a similar loss of Aramaic happened when thousands of Jews left northern Iraq around the time of Israel's creation in 1948. Many of them moved to Israel, where Hebrew became their language.

Many Assyrians who recently fled their homes in Syria are hoping to go abroad.

"None of us will ever be able to return to Syria. We know that, and so we know that our lives will have to built in other countries," said Gabriel, a 47-year-old English teacher who made his way to Lebanon with his family and dozens of other Assyrians shortly after the attacks.

He fled his village of Tal Jomaa as Islamic State militants were battling Kurdish forces in the area.

Gabriel and many other new arrivals from the Khabur River villages attend Mass at the St. George Cathedral of the Assyrian Church in Beirut. They share news about loved ones who have emigrated or discuss the fate of those who were not so lucky, such as people taken prisoner by Islamic State militants.

On a recent Sunday at the church, Samir Khizan, 49, who came to Beirut from Syria over a year ago, said that the militants agreed not to kidnap her 70-year-old brother when they attacked the family's village of Abu Tireh in February. But they forced him to destroy the crosses and shrines to the Virgin Mary at his home, she said.

"They told him to crush them with his feet, so he closed his eyes and quietly asked God for forgiveness before he did," she said.

Andre Hermes, 60, said that he has not heard from his brother, Awiyeh, since the February attacks. Awiyeh, he said, refused to leave his property, where he farmed cotton, wheat and tomatoes.

"He loved that home," said Hermes, who thinks his brother was among the roughly 250 people taken by the Islamic State from the Khabur River area. He suspects that the militants want to exchange the captives for their own fighters, who are being held as prisoners by Kurdish militias in the area. There are also rumors that the militants want hefty ransoms for the victims' release.

For their part, families fear that loved ones could be executed like scores of other Islamic State captives.

"They treat us like we're animals," said Hermes, who left his village over a year ago to attempt to move to Sweden. He has stayed in Beirut since then, receiving support from the local Assyrian community until he can emigrate.

Nuri Kino, founder of A Demand For Action, a group that raises awareness of persecuted minorities in Iraq and Syria, said that despite their mass displacement, Assyrians have managed to maintain cultural cohesiveness in some countries like Sweden, which has taken in as many as 150,000 of them. But he expressed doubt they will continue using Aramaic as they did in the Middle East.

Back in Beirut, Gabriel said his foremost concern is finding a new home for his family, as well as a job.

"Our people have been forced from our homeland," he said. "Of course we want to preserve our culture, but we need to find a new life for ourselves.

"Our lives in Syria are over."