U.N. Inaction on Mauritania
All Actions of the UN Human Rights System Critical of Specific States, 2014 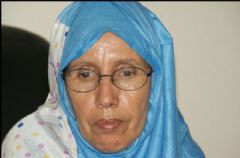 According to information from the International Federation for Human Rights, the leader of a radical Muslim group "Ahbab Errassoul" ("Friends of the Prophet") Mr. Yadhih Ould Dahi issued a fatwa on June 6, 2014 calling for her death.

Ms. Aminetou Mint El Moctar is a decorated human rights activist. She chairs the Association of female heads of household (l'Association des femmes chefs de famille), a non-governmental organisation that promotes human rights and defends the rights of women and children in Mauritania. She is the country coordinator of the Global Media Monitoring Project in Mauritania.

In 2009, Aminetou Mint Moctar spearheaded highly visible public campaigns to denounce trafficking of young Mauritanian girls to Gulf States and the exploitation of Mauritanian and West African women living in domestic servitude. Because of the work of Ms. Mint Moctar and others like her, the Government of Mauritania now recognizes the existence of these practices.

The threat called for the killing and gouging out the eyes of Moctar after she spoke to the mass media about the general situation of human rights in the country and the particular case of Mohamed Ould M'kheitir. M'kheitir has been in detention since December 2013 after being accused of apostasy. Moctar called for a fair trial for M'kheitir while making it very clear that she does not condone insults against the Prophet.

GMMP ambassadors and the WACC General Secretary call on the authorities of the Islamic Republic of Mauritania:

2. To carry out a prompt, thorough, impartial and transparent investigation of all those responsible for the threats and bring them to justice according to the law;

3. To put an end to all forms of harassment against Ms. Aminetou Mint El Moctar so that she can carry out her work freely and without hindrance;

4. To comply with the provisions of the Declaration on Human Rights Defenders, adopted by the United Nations General Assembly on 9 December 1998, and specifically:

â¢ Article 1: Everyone has the right, individually and in association with others, to promote and to strive for the protection and realization of human rights and fundamental freedoms at the national and international levels.

â¢ Article 9.1: In the exercise of human rights and fundamental freedoms, including the promotion and protection of human rights as referred to in the present Declaration, everyone has the right, individually and in association with others, to benefit from an effective remedy and to be protected in the event of the violation of those rights.

â¢ Article 12.2: The State shall take all necessary measures to ensure the protection by the competent authorities of everyone, individually and in association with others, against any violence, threats, retaliation, de facto or de jure adverse discrimination, pressure or any other arbitrary action as a consequence of his or her legitimate exercise of the rights referred to in the present Declaration.

â¢ Article 12.3: In this connection, everyone is entitled, individually and in association with others, to be protected effectively under national law in reacting against or opposing, through peaceful means, activities and acts, including those by omission, attributable to States that result in violations of human rights and fundamental freedoms, as well as acts of violence perpetrated by groups or individuals that affect the enjoyment of human rights and fundamental freedoms.

The Declaration on Human Rights Defenders is based on human rights standards enshrined in other international instruments that are legally binding such as the International Covenant on Civil and Political Rights, to which Mauritania is a member state.

5. To comply with the provisions of the Universal Declaration of Human Rights, the Convention for the Elimination of All Forms of Discrimination against Women (CEDAW) and regional and international instruments on human and women's rights ratified by Mauritania.

GMMP Ambassadors and the WACC General Secretary call on the members of the GMMP network to do whatever they can in their local contexts to raise awareness of the plight of Ms. Aminetou Mint El Moctar and to express their solidarity with her.