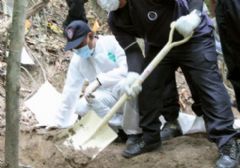 Authorities investigating a mass grave site in Malaysia in May, 2015

Another mass grave for human trafficking victims has been discovered in Malaysia, according to recent reports, raising further questions about the Department of State's decision to upgrade the country's ranking in this year's annual Trafficking in Persons report.

The grave reportedly contains the bodies of 24 people and is located near Malaysia's northern border with Thailand, where gangs of human traffickers have been known to hold regional migrants for ransom. Malaysian authorities unearthed 139 grave sites in May in the same area, sparking criticism of the government's efforts to crack down on the practice.

Some of the victims found in May were detained in "human cages" made of wood and barbed wire.

In Washington, D.C., the State Department has been sharply criticized amid allegations that it raised Malaysia's anti-trafficking ranking from Tier 3, the lowest level, to Tier 2, for political reasons. Reuters reported earlier this month that senior political leaders at the department overruled the agency's trafficking experts on the grades for 14 countries in this year's report, including strategically important nations such as Malaysia, China, and Cuba.

All three countries have been accused of sponsoring or failing to combat the modern-day slave trade, which involves forced labor and prostitution.

Malaysia is a party to the Trans-Pacific Partnership, or TPP, a landmark free trade deal that the Obama administration is currently negotiating with 11 other countries. A provision in the trade promotion authority (TPA) law signed by Obama, which allows Congress to hold a simple up-or-down vote on the TPP and is viewed as crucial to its success, bars consideration of a trade agreement with a Tier 3 country-raising suspicions that the State Department boosted Malaysia's ranking to secure the TPP.

The revelation of more mass graves in Malaysia is likely to renew concerns on Capitol Hill about the integrity of the report. Rep. Matt Salmon (R., Ariz.), chairman of the House Foreign Affairs Subcommittee on Asia and the Pacific, said in a statement that he was "deeply saddened" by the recent reports that "have made clear the true extent of human trafficking operations in Malaysia."

"This development raises further questions about the independence of the Administration's choice to upgrade Malaysia's human trafficking rating in the State Department's 2015 Trafficking in Persons (TIP) Report," he said.

Salmon noted that, according to the report, Malaysia actually convicted fewer traffickers last year than it did in 2013.

"I am also seriously concerned that the State Department made this upgrade based on promises of reforms that would be implemented after the reporting period, while disregarding other events that happened outside the period such as the discovery of mass graves," he added.

At a Senate Foreign Relations Committee hearing earlier this month, lawmakers threatened to subpoena all information related to the State Department's production of this year's report. Sen. Bob Corker (R., Tenn.), chairman of the committee, expressed frustration with the State Department's defense of the report's accuracy.

"This is possibly the most heartless, lacking of substance, presentation I have ever seen about a serious topic," he said. "I don't see how anybody could believe that there was integrity in this process."

Mark Toner, deputy spokesman for the State Department, said earlier this month that "colleagues from across the Department engage in iterative, fact based deliberations on the annual trafficking in persons report."

"The Department stands behind the findings and the process of the TIP report," he added.

The number of country rankings that were ultimately determined by the department's political leadership this year was unprecedented in the report's 15-year history, according to reports.

The Obama administration has come under withering criticism for its human rights record, including its perceived lack of public support for dissidents in China and Cuba. Obama previously referred to anti-trafficking efforts as "one of the great human rights causes of our time" and said that "the United States will continue to lead."