U.N. Inaction on Turkey
All Actions of the UN Human Rights System Critical of Specific States, 2006 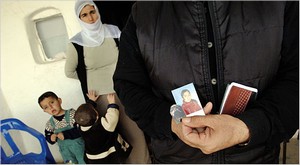 A father near Batman, Turkey, shows a photo of his 14-year-old daughter who recently committed suicide.
Credit: Lynsey Addario/Corbis

"Every few weeks in Batman and the surrounding area in southeast Anatolia, which is poor, rural and deeply influenced by conservative Islam, a young woman tries to take her life. Others have been stoned to death, strangled, shot or buried alive. Their offenses ranged from stealing a glance at a boy to wearing a short skirt, wanting to go to the movies, being raped by a stranger or relative or having consensual sex.

Hoping to join the European Union, Turkey has tightened the punishment for attacks on women and girls who have had such experiences. But the violence has continued, if by different means: parents are trying to spare their sons from the harsh punishments associated with killing their sisters by pressing the daughters to take their own lives instead.

"Families of disgraced girls are choosing between sacrificing a son to a life in prison by designating him to kill his sister or forcing their daughters to kill themselves," said Yilmaz Akinci, who works for a rural development group. "Rather than losing two children, most opt for the latter option.""