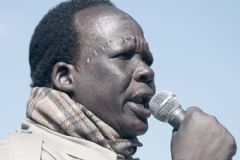 He is a free man now, and he's determined to use that freedom to stir President Obama to "save the lives of untold millions of Africans" who are in danger of dying in Southern Sudan.

Simon Deng, an escaped slave and Sudanese-American human rights activist, is on Day 22 of a hunger strike to prompt the Obama Administration to do something to halt the violence in South Sudan.

Deng has returned to Washington DC after a brief time in his home in New York City. He is standing in Lafayette Park, in front of the White House, as he did initially for 17 days. He has eaten no food in 22 days, drinking only water and juice.

A Coney Island lifeguard supervisor who lives in the Bronx, Deng says he is determined to continue his hunger strike until President Obama, the first black President of the United States, speaks out to help the world's newest African nation, South Sudan.

"The newest black nation needs help like a newly born baby," said Deng. "The President has a lot of responsibilities in this war-torn world, but South Sudan represents a core American value in so many ways -- it's black liberation, it's freedom from slavery, it's about people who have bravely resisted jihad terrorism for decades and now need our help."

At issue is the fate of South Sudan, the world's newest country. It was born in July 2011, after the Southern Sudanese - who are Christians and animists, or practitioners of native religions - voted overwhelmingly to secede from the Islamist North, whose government perpetrated the Darfur genocide and sheltered Osama bin Laden in the 1990's. That historic vote took place after U.S. President George W. Bush brought the warring parties to the negotiating table.

Since that time, however, the United States has, while providing the new country with aid money, abandoned its role as mentor and monitor. And those in power in the South, unable to resolve their differences, have turned to violence.

The fight started in Juba, the new nation's capital, as an intra-party dispute between Sudan's President, Salva Kiir Mayardit, and its former Vice President, Riek Machar. But it has spilled out into the surrounding areas and claimed the lives of 70,000 people, many of them women and children, most of whom have nothing to do with the warring factions. Deng says his 9-year-old niece and several other relatives died recently in the fighting.

Now the United Nations says four and a half million are on the verge of starvation. And Deng believes that, absent U.S. leadership, the situation could escalate to violence of Rwanda-like proportions.

The Southern Sudanese who are dying in huge numbers now are the same people who resisted Islamist terror in the past, according to Charles Jacobs, President of the American Anti-Slavery Group, a Boston-based organization combating modern day human bondage. "Slave raids were the terror weapon of choice for the jihad raiders from the north, just like Boko Haram does today in Nigeria," Jacobs told me.

"South Sudan was given birth by America," Jacobs said. "Credit goes also to South Sudan's fighters. They were victims of Islamist jihad before jihad became known in America."

Because the United States helped bring about South Sudan's independence, President Obama should step up and show leadership, Deng and Jacobs believe.

Moreover, they argue that, as jihadist terror spreads like a virus across Africa and hearts break for innocent children like those kidnapped by Boko Haram, the American President and people should recognize that Southern Sudanese Christians and animists have survived such oppression - and now need Western guidance.

"South Sudan is a black nation that survived the sort of jihadist terrorism now being forced on other African nations, and it needs U.S. guidance and support," said Jacobs.

Deng has written an open letter to President Obama with suggestions. For starters, the U.S. President could threaten harsh sanctions on South Sudanese oil exports - and follow through with such sanctions if the violence continues.

Obama could also threaten South Sudan's leaders with an arms embargo, and possible prosecution in international criminal court, if they fail to halt the bloodshed.

And if Sudan's elected leaders prove reluctant to stop the violence, Deng would like to see the United States step in and identify capable leaders who can form an interim government that can restore trust and protect human rights. He also suggests the U.S. President appoint a special envoy to oversee the allocation of U.S. funds to South Sudan, and to report directly back to Obama. Suggestions for the role include former Secretary of State Colin Powell and former Secretary of State Madeleine Albright.

A peaceful end to the current conflict in South Sudan "will not require U.S. boots on the ground" Deng writes. "But it will require consistent engagement, seriousness of purpose, and a willingness to both make threats and follow through on them. In short, it will require your leadership."

At a time when many around the world view the U.S. President as weak, the crisis in South Sudan presents President Obama with a historic opportunity to show strong leadership -- as a peacemaker and savior of hundreds of thousands of innocents.

Meanwhile, Simon Deng, once a slave, has returned to Washington DC, where he continues his hunger strike in front of the White House.