U.N. Inaction on Egypt
All Actions of the UN Human Rights System Critical of Specific States, 2018 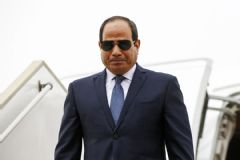 Egyptian security forces arrested at least 19 human-rights lawyers and activists this week in raids that reflect the country's security state is widening its assault on government critics in an attempt to eliminate any challenge to President Abdel Fattah Al Sisi.

Even against the backdrop of years of government repression, this week's arrests were striking because of the large number of people held and the detention of prominent human-rights lawyers

"It's a vicious attack," said Aida Seif El Dawla, founder of a center working with victims of torture by Egyptian police. "Every day, every second day there is a group of people who are arrested."

Mr. Sisi came to power in a military coup in 2013, in which he led the overthrow of President Mohammed Morsi of the Muslim Brotherhood. Following the coup, the state set in motion a lethal crackdown on Islamists, in which more than a thousand died and tens of thousands were arrested.

In the following years, the government widened its target to include non-Islamist political opponents, human-rights groups, independent news organizations, and anyone critical of the new military-backed government.

The Egyptian government has defended its actions against critics, stating that the moves are intended to restore stability and security to the country following years of political unrest and violence following the 2011 revolution that ousted Hosni Mubarak from the presidency.

During this week's raids, security forces burst into the homes of human-rights workers in the early morning hours, seizing the activists and searching their properties.

Those arrested included Huda Abdelmonem, a prominent lawyer and a former member of the National Council for Human Rights, a government-backed watchdog.

Members of Ms. Abdelmonem's family published images of her apartment in the aftermath of the raid, with papers, books, furniture and personal items strewn about, suggesting a violent search by security forces.

The whereabouts of the 19 people arrested Thursday are currently unknown, according to human-rights groups monitoring the case.

Others arrested this week include members of the Egyptian Coordination for Human Rights, a group whose work has been widely cited by established international media and by Human Rights Watch. The group's director, Ezzat Ghonim, is being held in secret detention by the security forces, according to his family and human-rights groups.

The Egyptian government denies the use of so-called "forced disappearance" in which the security forces refuse to acknowledge that they are holding particular detainees.

Separately this week, Egyptian authorities moved to implement a restrictive new law on the media, demanding that news websites register with the government or face closure.

The move was an illustration of the Egyptian state's tightening grip on media in the country and an increasing trend in which even the mildest criticism of the government can result in arrest.

Last week, security forces arrested an economist, Abdel Khalek Farouk, for publishing a book critical of the government's handling of the economy. The government accused him of spreading "false news." He was freed days later on the orders of a court.

"Anyone who dares to speak out about human rights violations in Egypt today is in danger," Najia Bounaim, North Africa campaigns director at Amnesty International, said in a statement.