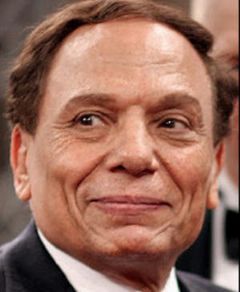 Adel Imam was sentenced to three months in jail with hard labour for "defaming Islam" in several roles on stage and screen.
Source: Post Jagran

CAIRO - The Arab world's most famous actor, Adel Imam, has been sentenced to three months in jail for "defaming Islam" in several roles on stage and screen, the Egyptian comic said on Thursday.

A Cairo court sentenced Imam, a UN goodwill ambassador described as the Arab world's Charlie Chaplin, in absentia to three months in jail with hard labour, after being sued by Asran Mansur, a lawyer with Islamist ties.

"I will appeal the ruling," Imam told AFP.

"Some people seeking fame filed a suit against me over works I have done which they consider insulting to Islam, and this is of course not true," he said.

The 71-year-old celebrity has a long history of legal tangles with Islamists who regard the actor's work as blasphemous. In the latest case, Imam said the works criticised are the 1994 movie "Al-Irhabi" (The Terrorist), in which he portrays an Islamic fundamentalist and the play "Al-Zaeem" (The Leader), a comedy in which Imam pokes fun at the region's autocratic leaders.

"All the works in which I have starred went through the censors. Had they been found to be defamatory, the censors would have banned them," Imam said.

He has acted in more than 100 films, including the award-winning "The Yacoubian Building" from Alaa al-Aswani's novel, and 10 plays praised by the Arab public for their irreverence towards both the powerful and the religious.

In a 1998 TV debate, called "Star on a Hot Tin Roof", Imam squared off with three Islamists from the Muslim Brotherhood, the movement whose members now hold a strong majority in Egypt's parliament.

Since 2000, Imam has served as a goodwill ambassador for the UN refugee agency, alongside likes of film star Angelina Jolie and Italian fashion designer Giorgio Armani.

"In the course of his rich career, he has mixed humour with sadness to portray ordinary people who are victims of injustice and poverty," the agency says in a biography on its website. "For all these reasons, Imam became a symbol for people promoting tolerance and human rights in the Arab world," it said.