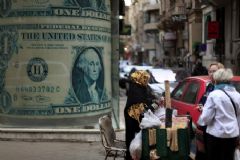 (AP Photo/Khalil Hamra) An Egyptian vendor sells nuts in front of a giant poster of a U.S. dollar outside a currency exchange office in Cairo, Egypt.
The Egyptian government has begun pressing a new law on civil society groups that would stop all foreign funding for Egyptian NGOs, prohibit them from engaging in any work related to democratic politics and force many existing organizations to close.
Source: Yahoo

IT'S BEEN FIVE weeks since the Obama administration granted Egypt its full $1.3 billion in annual military aid despite its government's failure to meet conditions set by Congress for advancing democracy. In granting a waiver on national security grounds, administration officials argued that continuing the funding was more likely to encourage cooperation with the United States and progress on human rights than a cutoff would.

As it turns out, the administration was wrong. In a number of tangible ways, U.S.-Egyptian relations and the military's treatment of civil society have deteriorated since the waiver was issued March 23. The threat to nongovernmental organizations, whose prosecution triggered the threat of an aid suspension, has worsened. Conditions for U.S.-backed pro-democracy groups elsewhere in the Middle East have deteriorated as other governments have observed Egypt's ability to crack down with impunity.

Consider the situation of the three U.S. organizations whose offices were raided and closed by Egyptian security forces in December - the National Democratic Institute, the International Republican Institute and Freedom House. Before the waiver, senior Egyptian officials repeatedly promised U.S. envoys that the groups would be legally registered, their offices allowed to reopen and their property returned. The fine points of a settlement were under discussion. Once the waiver was issued, the process was frozen and communication ceased, according to Nancy Okail, the head of the Freedom House office in Cairo.

The government, meanwhile, has begun pressing a new law on civil society groups that would stop all foreign funding for Egyptian NGOs, prohibit them from engaging in any work related to democratic politics and force many existing organizations to close. Other Arab governments have taken the cue: The United Arab Emirates last month shut the regional office of the National Democratic Institute.

The one concession Egypt made to the United States before the waiver was allowing a half- dozen American employees of the NGOs, who had been on trial in Cairo, to leave the country. But following the waiver, the government asked Interpol to issue warrants for their arrest. The trial of 14 Egyptian staffers left behind, meanwhile, continues, under harsher conditions. During their last court appearance, they were placed in a cage along with common criminals, and they have been threatened with having the charges against them upgraded to treason - which carries a death sentence. "We feel like we have been forgotten by the international community," said Ms. Okail.

U.S. officials argued that an aid cutoff might cause a dangerous political backlash in Cairo. But since the waiver was issued, Egypt's government-owned press, which is controlled by the military's intelligence agency, has continued a toxic campaign of anti-Americanism. The State Department also argued that aid should continue because Egypt had stuck to the 1979 Camp David agreements with Israel. But after the waiver, the government unilaterally canceled a deal under which it was supplying Israel with gas.

Though Egypt has scheduled a two-round presidential election for this month and next, it remains unclear whether a promised transition to democratic civilian rule by July 1 will take place. One thing is certain: The Obama administration has lost much of its leverage over the Egyptian military - and its credibility with Egyptian democrats.