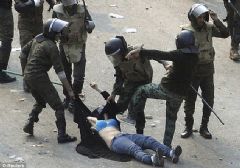 Source: Daily Mail
This shocking image shows Egyptian army soldiers dragging this helpless woman on the ground and kicking her hard in the chest after ripping her clothes from her body

Georgi said nine of the 13 people killed since the start of protests on Friday "were wounded by gunshots," the official MENA news agency reported.

One of the dead "breathed his last breath in detention in the south Cairo court, before he was presented to the prosecution. The cause of death was traumatic injury to the head that causes internal bleeding," he said.

Georgi said only 10 of the dead had been autopsied so far. Riot police used rocks, batons and live ammunition to disperse protesters overnight and into Tuesday morning, witnesses said, in violence that has left 13 people dead since Friday, according to the health ministry.

The clashes have heaped pressure on the ruling Supreme Council of the Armed Forces (SCAF), with both liberals and Islamists facing off in Egypt's first post-revolt elections condemning its handling of the transition.

In Cairo's Tahrir Square, medics said four people were killed overnight. Health ministry officials told state television there had been no deaths, but that four people had been injured.

One witness told AFP that a 14-year-old child in the field hospital had been treated for a bullet wound to the chest.

But health ministry official Adel Adawi said no one was killed overnight and that the official death toll stood at 12. He told state television that of more than 600 injured since Friday, 106 remained in hospital.

"One man is currently undergoing surgery after a gunshot went into his back and out through the stomach," Adawi said.

Meanwhile, Interior Minister Mohammed Ibrahim urged security forces and troops to exercise "maximum self-restraint" as he toured the outskirts of Tahrir Square where the worst fighting has taken place.

The SCAF â which took power when a popular uprising ousted Hosni Mubarak in February â denies it ordered the use of force against protesters but admitted troops had beaten a veiled woman after ripping her clothes.

A picture showing the woman sprawled on the ground, helmeted troops towering over and kicking her, her stomach bared to reveal her bra, has encapsulated the heavy hand used against protesters and sparked nationwide outrage.

Footage on social networking sites showed army troops beating protesters, sometimes leaving them motionless on the ground, but it is the beating of women that has enraged the country.

"The forces that violate the honour (of women)," read a headline in the independent daily Al-Tahrir above a picture of a soldier grabbing a woman by the hair as another raised a club over her.

An impassioned Hillary Clinton on Monday accused post-revolution Egypt of failing its women as she denounced the stripping and beating of the female protester as "shocking."

In unusually strong language, she accused Egypt's new leaders of mistreatment of women both on the street and in politics since the revolt that overthrew Mubarak.

"This systematic degradation of Egyptian women dishonours the revolution, disgraces the state and its uniform, and is not worthy of a great people," she said.