U.N. Inaction on Egypt
All Actions of the UN Human Rights System Critical of Specific States, 2019 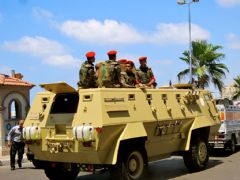 Egyptian activist claims she was tortured, beaten after arrest

An Egyptian pro-democracy activist claims she was tortured and beaten after being arrested amid a sweeping government crackdown, a leading rights group said Monday.

Amnesty International said Esraa Abdel-Fattah was brought before prosecutors late Sunday following her arrest by plainclothes security forces a day earlier. She told prosecutors she was tortured by police officers who beat her, attempted to strangle her and forced her to stay in a standing position for nearly eight hours. She remains in custody.

Abdel-Fattah's detention comes amid a wave of arrests following small but rare anti-government protests last month. More than 2,600 people have been arrested so far, although Egyptian authorities have released hundreds after brief detentions.

Egypt has witnessed an unprecedented crackdown on dissent since President Abdel-Fattah el-Sissi came to power in 2014, jailing Islamists as well as secular activists. El-Sissi's government has also put through austerity measures that have badly hit the country's poor and middle classes.

Abdel-Fattah was a co-founder of the April 6 movement, which played a crucial role in the 2011 pro-democracy uprising that toppled longtime autocrat Hosni Mubarak. Amnesty International released a statement condemning her arrest as "another indication that Egyptian authorities are stepping up brutality against human rights defenders in a bid to 'terrorize' critics and opponents."

"The manner of her arrest - being abducted by plainclothes officers and taken away in a van in public - marks an alarming new trend in the way Egyptian authorities target human rights defenders," said Najia Bounaim, the group's North Africa campaigns director. Bounaim called authorities to investigate torture allegations to hold those responsible accountable.

Abdel-Fattah was ordered to remain in custody for 15 days pending an investigation into allegations of joining an outlawed group, disseminating false news and misuse of social media, according to rights lawyer Khaled Ali. He said Abdel-Fattah announced she was going on hunger strike.

Ali said the activist was added to a case that also includes human rights defenders such as lawyer Mahienour el-Massry, former head of the Dostour party Khalid Dawoud and political science professor Hassan Nefea. All were arrested following the small but rare Sept. 20 protests in several cities that demanded el-Sissi step down.

A spokesman for the interior ministry, which oversees police forces, was not immediately available for comment.

Also on Monday, the BBC voiced its concern over "current restrictions" on its digital platforms in Egypt.

Since last month's protests, internet users have reported difficulty accessing Facebook Messenger and other news websites such as the BBC.

Jamie Agnus, BBC World Service director, said that "any interference of this kind seriously undermines media freedoms." He called for Egyptian authorities to restore the service.