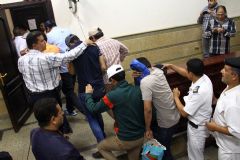 Egyptian men enter a Cairo courtroom before being convicted for appearing in a video of a gay wedding.

An Egyptian court has convicted eight men for "inciting debauchery" following their appearance in an alleged same-sex wedding party on a Nile boat, sentencing each of them to three years in prison.

The Internet video shows two men exchanging rings and embracing among cheering friends. In September, a statement from the office of Egypt's chief prosecutor said the video clip was "shameful to God" and "offensive to public morals."

Saturday's verdict is the latest in a crackdown by authorities against gays and atheists. The campaign also targets liberal and pro-democracy activists and violators of a draconian law on street protests.