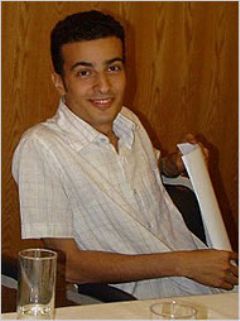 CAIRO - An Egyptian military tribunal on Sunday sentenced a young blogger to three years behind bars for criticizing the armed forces, according to human rights activists and the government-owned al-Ahram newspaper.

Al-Ahram said the military tribunal found Maikel Nabil Sanad, 26, guilty of "insulting the military" and "disturbing public security" because of a blog entry titled, "The army and the people were never one hand."

Nabil's blog went on to denounce the military's use of detentions and courts-martial to punish critics and democracy advocates.

The military tribunal handed down the ruling late Sunday after Nabil's attorneys had departed, a rights group said. Nabil was immediately remanded to prison.

As word of the ruling churned through Twitter and Facebook on Monday, the tribunal's decision seemed likely to increase the friction between the pro-democracy movement and the Supreme Council of the Armed Forces, which took over after President Hosni Mubarak's Feb. 11 ouster.

Many democracy advocates were enraged after armed troops stormed Tahrir Square on Saturday to break up a camp of overnight demonstrators and seize about 20 mutinous soldiers who were among them. At least one person was killed, and dozens were injured. Mubarak's defiant speech to the nation the next day only further exasperated many people.

Even before the tensions mounted, Nabil's case was being closely followed by the demonstrators who fill Tahrir Square every Friday after midday prayers to demand that the military council put Mubarak on trial on corruption charges and ease restrictions on civil liberties.

"As soon as he was caught, everyone knew about it," said Ahmed Abdelkawi, a physician who joined the Friday protest two weeks ago. But Abdelkawi, 37, also said that Egyptians generally respect their military and found Nabil's writings too extreme. "He said he was a pacifist. He said he did not want to go into the army," Abdelkawi said, referring to Egypt's mandatory military service. Some others considered Nabil an Israeli sympathizer.

The title of Nabil's offending blog is a variant of a phrase often chanted by demonstrators to show unity with the military while also urging it to embrace the Egyptian people's call for a more open society.

Even some of those Egyptians who dislike Nabil's writings say they object to the military's treatment of him.

Gamal Eid, a lawyer who heads the Arabic Network for Human Rights Information and handled the blogger's case, said the tribunal passed the sentence after Nabil's legal team, having been told that the case would be postponed until Tuesday, had departed.

"The trial was not fair at all, and the sentence was very tough," Eid said in an interview Monday. "There is a lot of anger among people about the sentence, but how it will be reflected, or how they will express it - this is what I do not know yet."