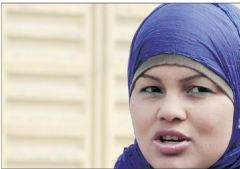 An Egyptian military court has acquitted an army doctor, Ahmed Abel, who had been accused of conducting "virginity tests" on female protesters, including activist Samira Ibrahim (above).
Photograph by: MOHAMED ABD EL-GHANY, REUTERS , AFP

Ahmed Adel was cleared of conducting the test on Samira Ibrahim, who brought the case against him, after the judge found the witness statements to be "contradictory," the official MENA news agency said.

"It's a joke, a theatre," an outraged Samira Ibrahim told AFP after the ruling.

"The fact that the case was in a military court is a disaster," she said.

But Huwayda Mostafa Salem, the lawyer for the defendant, told reporters outside the court: "The case was not strong in the first place. It was brought about due to media pressure." The case had sparked a national outcry and getting it into court was considered a victory for the female protesters who were subjected to the tests and had raised hopes of further trials of those accused of abuse.

"The ruling shows how politicized the military justice system is, and the lack of independence there," said Heba Morayef, researcher at Human Rights Watch's North Africa division. "The hope that there will be any accountability for the military will be receding," Morayef told AFP.

Women said they were beaten, given electric shocks, subjected to strip searches while being photographed by male soldiers, then forced to submit to "virginity tests" and threatened with prostitution charges.

An army general defended the practice at the time saying: "We didn't want them to say we had sexually assaulted or raped them, so we wanted to prove that they weren't virgins in the first place."