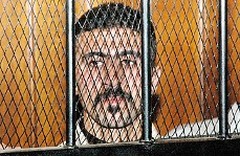 "Egyptian human rights activists have spent years searching for evidence of the torture of detainees in police stations, detention centers and prisons, but few were prepared for such evidence to begin arriving in the form of a graphic cell-phone video. Even more shocking was the fact that the graphic recording of a man writhing in agony, begging for mercy as he is sodomized with a cane and verbally abused by men identified in an official investigation as police officers, is believed to have been disseminated by those same officers in a bid to humiliate the victim and intimidate his colleagues. On the recording, one of two officers due to stand trial in March over the incident is heard telling the victim, "Everybody in the parking lot will see this tomorrow."

The images, relayed via the Internet, shocked even human rights activists well aware of such abuses. "The video is very traumatic and powerful," says human rights activist Aida Seif El Dawla, of the Nadeem Center for the management and rehabilitation of victims of violence in Cairo. "You are watching real rape," she adds, explaining that when she started mapping incidents of police torture back in 1993 she realized that the practice was widespread all across the country. "To read and to hear is one thing, but to see is extremely shocking," she says.

The video clip depicting the torture of 21-year old minibus driver Emad El Kebir was sent to the cell phones of fellow drivers to warn them that the same can happen to them if they refuse to do the bidding of security officers. Kebir's humiliation in the Bulaq police station is alleged to have occurred in January 2006 after he got involved in a dispute between his cousin and the police. The images that first appeared last November appeared in a Cairo newspaper and were circulated by bloggers. El Kebir, whose father suffered a heart attack when he saw the images, was convinced to come forward by human rights groups and activists. The two officers he accused of leading the attack were detained by the authorities and are set for trial in March. But Emad El Kebir himself was jailed this month after being convicted for resisting the authorities - police accused him of wielding a broken bottle and injuring an officer. His lawyers fear for his fate in prison, where he is serving a three-month sentence.

Human rights activists say that systematic police brutality is part of the Egyptian security apparatus, and has been on the rise. Torture became widespread in the early 1990s, but was focused on Islamist militants and their families. More recently, though, non-political detainees have also begun to report being tortured as police seek to extract confessions in criminal cases. Activists were enraged last week when an Interior ministry official in an interview to the daily Masri El Youm newspaper blamed independent media for exaggerating torture issues admitting that "the percentage of torture in Egypt over the past few months has been 5 out of 1000.

According to the Egyptian Organization for Human Rights (EOHR), torture was found to be even more widespread in criminal cases, even during simplest interrogations over crimes such as theft and fraud. "Police brutality is systematic and widespread," says Hafez Abu Saeda, head of EOHR.

Abu Saeda and other human rights campaigners are hoping that the publicity generated by the El Kabir case will encourage other victims to come forward, and that public prosecutors can be pressed to monitor police detention centers. They are also pressing for changes in Egypt's criminal law in order to hold the police hierarchy, and not only those who carry out torture orders, to be held accountable."