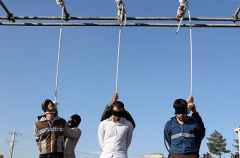 Iranians before their execution (file photo)

Eight Prisoners Hanged for Drug-Related Charges in Iran This Morning

Militants fighting for the Islamic State in Iraq have savagely executed 10 doctors who refused to treat wounded members of the terrorist organisation.

According to the official website of the Judiciary in Alborz Province, the prisoners who were executed this morning were all convicted of drug-related charges.

Haji Reza Shah Karami, the prosecutor of the Revolution Court of Karaj said: These eight prisoners were involved in manufacturing and selling narcotic drugs such as crystal.

Non of the prisoners were identified by name.

According to reports by Iran Human Rights (IHR), at least 2052 prisoners have been executed between 2010 and 2014. Drug convicts are tried by the Revolution Courts behind the closed doors and many of the prisoners are sentenced to death based on the confessions they have given under torture.