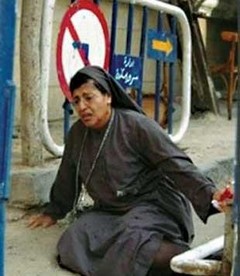 "Egypt, which appears to be intensifying its crackdown on Christianity in recent months, now has arrested and detained two Egyptian Christian human rights activists who are connected to a Canadian ministry.

According to Christian Solidarity International, members of Egypt's State Security Investigations took Adel Fawzy Faltas and Peter Ezzat Mounir into custody, and confiscated computers and documents from their homes.

The prisoners were being held incommunicado at the Lazoghly Square headquarters of the federal agency, and while no formal charges were announced, security statements accuse the two of insulting Islam, preaching Christianity and maintaining an unlawful association with a foreign organization.

Faltas heads the Egyptian branch of the Canadian-based Middle East Christians Association, a religious liberty group, and Mounir is believed to be an associate with the group.

The group's corporate identity statement calls for secularism, equality and full citizenship for Christians in Egypt, as well as the rest of the Middle East.

The concern, CSI said, is that Egyptian security police are known to routinely use torture on prisoners while they are incarcerated.

"Some of the atrocities and malicious practices of the Egyptian police came to public notice when bloggers managed to publish videos of torture and abuse of citizens at the hands of the police," CSI said. Even the lawyers for the men detained have been unable to contact them, the organization said.

As WND also has reported, an Egyptian Christian who had fled his home nation has been given temporary permission to remain in the United States because he, "most assuredly has a right not to be tortured," a federal court as concluded.

The court pointedly concluded that "diplomatic assurances" of his religious rights "by a country known to have engaged in torture" weren't reassuring.

"The arrests of Messrs. Fawzy Faltas and Ezzat Mounir take place against a background of increasing state-sponsored persecution of Christians in Egypt and growing intolerance of Christians and other religious minorities throughout the Middle East. If present trends of violence, intimidation and discrimination continue, the tragic fate of oriental Jewry could soon befall Middle Eastern Christians," he said.

CSI reports that the arrests followed increased MECA activity in Egypt including the submission of a lawsuit against Egypt President Hosni Mubarak and other members of the Egyptian government on behalf of victims of the anti-Christian al-Kosheh riots in 2000, which left 21 Christians dead.

Also ruffling feathers lately have been a book documenting the persecution of Egyptian Christians and the high-profile legal case in which a convert to Christianity petitioned to have the government recognize his change in religious affiliation. MECA reported that police stormed the men's homes, and Mamdouh Makhleh, a lawyer representing the two, said his clients likely would face a hearing soon.

"I will try to hasten their case ... so they ... will not be subjected to any sort of torture or be forced to give any statement that could be harmful in their case," he told Associated Press.

MECA said the charges would be along the lines of possession controversial literature and taking part in activities that could endanger state security, such as missionary work. All carry lengthy prison terms.

The U.S. Copts Association said the arrests likely were triggered specifically by the men's reporting on the killing of an Egyptian Christian by two police officers.

The day before they were arrested, the Copts Association said, the two had investigated reports a Coptic worker in Cairo was thrown from his balcony by two members of the Egyptian police after he refused to pay them extortion money.

"It appeared that two policemen had stopped Nasser Sediq Gadallah on his way home from work and demanded money by force. He refused to pay and went and filed a report with the prosecutor's office charging them with extortion and brutality. Eyewitnesses reported that both members of the police visited Naser's home shortly after he filed his report and tried to force him to withdraw his complaints from the prosecutors' office. When he refused, they threw him off his balcony in the presence of his family and other eyewitnesses," the report said.

The report said a short time later police reported the death as a suicide, but Ezzat and others took pictures of the crime scene, interviewed witnesses on film and encouraged the family to report the death.

WND also recently reported on two young Egyptian boys who were ordered to take a school test that would result in their conversion to Islam.

They wrote, "I am Christian," on the exam papers, knowing in advance that could very well spell the end of their educations. Now a U.S.-based organization is lobbying for international pressure on Egypt to quit forcing Christians into such no-win situations.

Their situation arose because of the Islamic law demand that children follow their father's faith if it is Islam. Their father, who abandoned the family a number of years ago, had converted to Islam. The nation's education ministry then requires children to take â and pass â a test on Islam in order for them to be advanced in school. No passing grade, no more schooling, officials said.

Eibner asked Bush to "request from Egypt's head of state, Pres. Hosni Mubarak, the immediate release of the ... Christian prisoners, and to impress upon him the need for Egypt to respect the internationally confirmed human rights of religious and secular minorities."

CSI earlier had reported that a third Egyptian Christian, Adeel Ramses Kosman, also was arrested at the same time, but his detention could not immediately be confirmed."