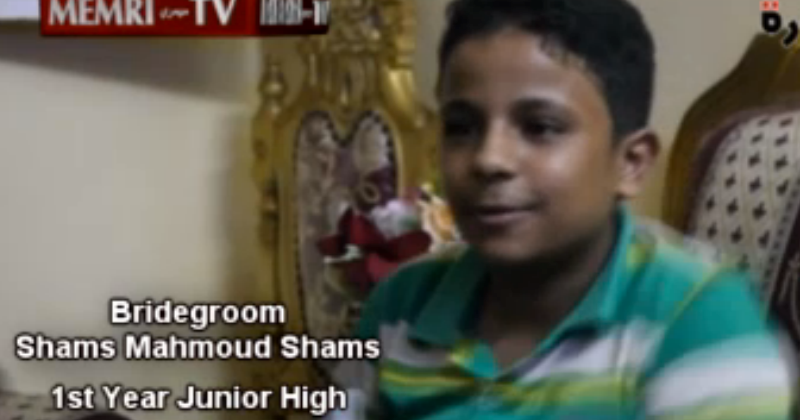 Father Of 13-Year-Old Egyptian Boy Married Off To 10-Year-Old Girl: ‘You’re Never Too Young For Marriage’

Following are excerpts from a report on a child wedding which took place in Egypt. The report was posted on the Internet on September 1, 2013. Footage from the wedding celebration.

Reporter: "The city of El Senbellawein in the Dakahlia Governorate of Egypt witnessed what observers called the strangest wedding in the 21st century. The bridegroom was only 13 years old, and the bride was 10 years of age."

Mahmoud Shams, father of the bridegroom: "We wanted to make sure they marry someone with the proper lineage. We saw that Shams was fond of Iman, so it all worked out, Allah be praised. You are never too young to be married. We could have just told him to marry his cousin, and he would have. He would have had no say in it. The important thing is to get married. Love will come later.

"But in our case, there was agreement from the outset. The two families are interconnected â the two mothers are like sisters, and the bride's father and I are like brothers.

Reporter: "Both the bride and the groom declared their willingness to marry, and their happiness about tying the knot with one another, despite their young age." [...]

Shams, the bridegroom (1st year in junior high): "I love Badran [father of the bride]. He's like a father to me. I love him, and he has always loved me. I want to be an engineer, so I hope to complete my studies.

Reporter: "Were you happy to get married?"

Reporter: "Why did you agree?"

Iman: "Because Mom and Dad told me to."

Reporter: "They told you to, so you agreed?"